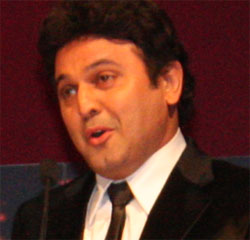 Ali Asgar who was last seen in Kahaani Ghar Ghar Ki and Kaante Ki Takkar has bagged a meaty role in Shahrukh’s Red Chillies Entertainment Pvt. Ltd’s first venture on television, Ghar Ki Baat to be launched on NDTV Imagine. He will be seen along with Sumeet Raghavan and Swapnil Joshi.

“Ali Asgar’s role in the show has different avatars to it. Definitely it will be on a comic side, with him seen in different get-ups of vendors,” says our khabroo.

When contacted Ali to know more he said, “I’m sorry, but it’s too early to divulge any information.” On asked whether it is a full-fledged role or a cameo, Ali quips “Of course it’s a full fledged role. I don’t do cameos,” concludes the actor.

Juhi Babbar and Jayati Bhatia will also be seen playing prominent roles. The concept of the show is on the lines of yester year’s very popular show Yeh Jo hai Zindagi. “The launch is most likely on 23rd January, but there can be some last minute changes to it. The time slot has not been decided, though the producers are trying for a prime time slot,” concludes the source.

Ali must be in smiles as he has bagged a good role in SRK’s first fiction show on TV!!

SRK is proud of his roots
Aur acting can rock anywhere
Tv..Films..Stage..its all da same

+ 2
13 years ago SRK''s gonna produce tele shows now? Going back to his roots I see!