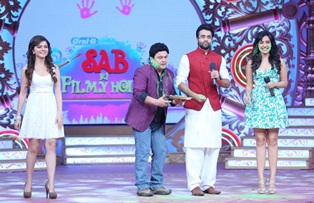 In the list of all the performances, Ali Asgar & Rubina Dilaik from Jeannie Aur Juju, were scheduled to perform on a romantic song to enthrall everyone. Jackky Bhagnani & Neha Sharma attended the show to promote their upcoming movie - Youngistaan'. Jackky & Neha enjoyed all the performances thoroughly.

When they were told that the upcoming performance was a romantic one that would be presented by Ali & Rubina, both Jackky & Neha requested the organizers to join them on the stage as they too wanted to be part of the event as participants rather than spectators. Both the couples swayed together on the tunes of a romantic Bollywood song which garnered applause from the audience.

Ali Asgar said, "Rubina and me had rehearsed for this dance performance. We both were pleasantly surprised when Jackky & Neha decided to join us on stage. It went smoothly with all four of us coordinating the dance steps in a proper fashion. It was a lovely experience to dance with both the stars."

All the performances are sure to entertain the audience and this dreamy performance will give them a romantic flavor as well.

7 years ago Thanks IF for the article, please keep us feeding on JAJ show..
Will be excitment all four dancing, Rubina/Ali good dancers
we are all waiting, SAB ka Holi Dhamaaka.

7 years ago Still 2 more days.. waiting is getting too long... but eager to watch..stay blessed.

7 years ago All the best for your performance. You are the most prettiest girl on TV

7 years ago Loving you as jeannie rubina Dilaik. Waiting to see you rocking holi stage

flowerlilly 7 years ago Rubi have a nice trip to NY.rock the show and enjoy.