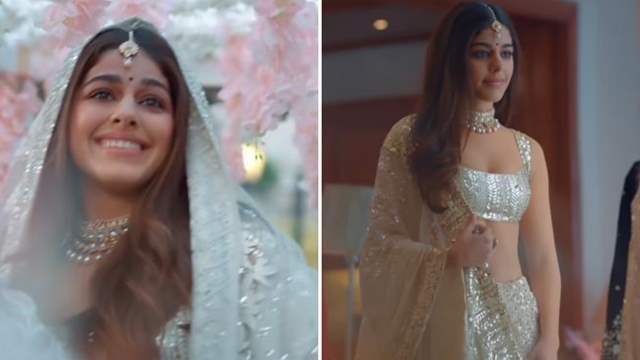 Alaya F who made her debut with Jawaani Jaaneman has gone on to win the praise of many people and critics alike. Her fans have now been treated with a music video that is her first as she features in the new song 'Aaj Sajeya'.

Looking glamorous and stylish in every outfit she dons for the music video, Alaya F is a sight to behold. Being the cool bride, wearing a leather jacket with her lehanga and sneakers — showing her undisputed choice and love for them, Alaya is setting an example through the music video.

The marriage look is a silver lehanga that she again pairs up with chunky sneakers, the video goes on to show how the groom steals her sneakers to get away with all the famous Hindu ritual. Alaya looks like a treat to the eyes as she takes on role of such stature with such ease.

The music video is directed by Punit Malhotra and its huge feat for Alaya F to be working with the big director so early on in her career. The actress, in a short span of time has captivated the audiences with her performances.

Aaj Sajeya featuring Alaya F and Taha Shah Badussha has been sung by Goldie Sohel. Produced by Dharma 2.0, the song has been helmed by the director of Student Of The Year 2, Punit Malhotra.