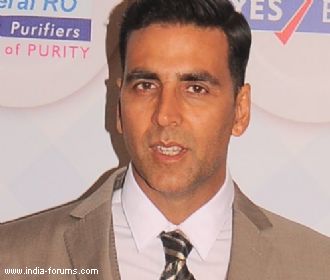 Bollywood star Akshay Kumar may be seen just as an entertainer, but he has got his finger on the pulse of movie business. He says the sure-shot success mantra is to either make your own film or go for profit sharing.

"I have a very simple solution - make your films, because when you make your film you will not include your remuneration and it takes off the burden from a film," Akshay told IANS in an interview.

"So, when you make a film for Rs.20 crore and release it, the profits - be it Rs.5 crore or Rs.10 crore or Rs.40 crore - is yours. It's all your luck. Also, your film won't flop because your remuneration is zero," added the actor, who makes film under his two banners, Hari Om Productions and Grazing Goat.

For writers who rue that they do not get their dues, he suggested: "I am making three-four films and I pay my writers well. Again they can also go for profit sharing. If the film works well, they can ask for their cut in the profit."

According to a recent report, the remuneration of Bollywood's A-listers starts from Rs.10 crore and goes up to Rs.40 crore.

Why are actors asking for such astronomical sums?

"It's not easy to decide remuneration because sometimes a film works and sometimes it does not. So I have come to a conclusion: make your own films," said Akshay, who feels "the biggest burden on a film is its artist."

"If you remove that burden, it is impossible for a movie to flop. It's simple economics," added the star, who has been active in filmdom for more than two decades and has about 100 films to his credit.

This does not mean that the 44-year-old will not work in outside films. He will, but on one condition.

"I would work in other producers' films, but I will charge according to the film's box office business. Profit sharing, in short. This is the only way," he added.

Marketing has become an integral part of a film, says Akshay. It helps in the first three days of the collection, but after that, it is all about content. So one needs to focus on the script and screenplay as well, he said.

"Marketing is a big thing. Marketing works for the first three days and content works after those three days. So it is very important to have the right content as well," he said.

"For instance, a film with a lot of action doesn't work. But if you just slap according to the screenplay and if it is positioned rightly, it works wonders for a film. If you have seen 'Deewaar', it is supposed to be one of the best action movies. But actually it had a small action scene but that came at the right time and worked," he said.

Akshay, who started his career with action movies like "Khiladi" and "Mohra", now returns to the genre after seven years with "Rowdy Rathore".

"I personally believe that people enjoy raw action more than technology. If you use too much of technology, it will bounce back. People are very smart and understand what is real and what is unreal.

"If you sit in single theatres and watch such films with the audience, you will hear people saying, 'Arre ye toh computer pe kiya hai (This is done on computer)'. So you can't take your audiences for granted.

"So when I did my first action film 'Rowdy Rathore' after six years, I chose to do raw action. I believe in manpower and not technological power," he said.