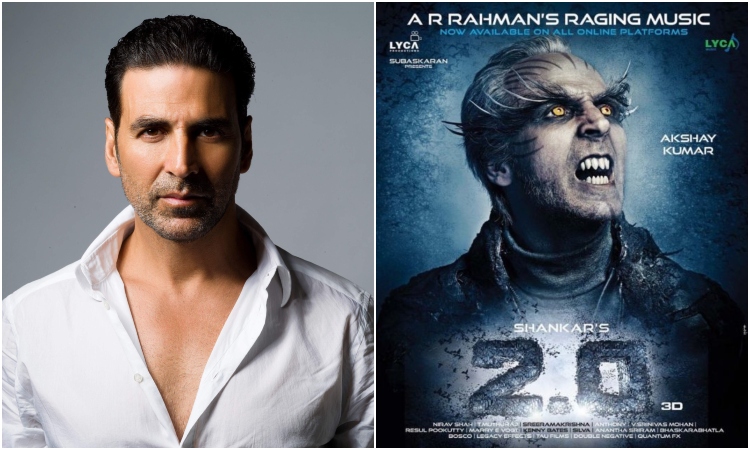 You've already done many films about social messages but what attracted you towards this film?

I was really very excited because as I heard the screenplay, and I thought I had never heard anything like this before. I've done many social films but this was the one which goes on to give an international message. So I was very excited about this and why anyone has ever thought about it. I was surprised Shankar he thought of it like this he came out with such a brilliant idea and you need to watch the film to know what the film is all about. Plus I was happy that I am getting an opportunity to work with 'The Rajnikant', and Mr. Shankar our country's one of the best directors and they also told me that this is going to be India's one of the most expensive films and I get a chance to be with that.

Were you aware that you'd be playing a negative character?

Were there any difficulties you faced while prepping up with your looks?

I had to sit for almost three and half hours while the make-up artists were prepping me for the shoot, you have to sit patiently and I became more patient and more subtle, so there was nothing else than that and you had to sit for three and half hours on the same chair. And after the shoot, it almost took them one and a half hour to remove each and every element from your body.

Where there any anecdotes apart from Rajni sir saying that it is completely your film?

It is very much his film and the film is called 2.0 and It cannot be in 2.0 he is 2.0. It is very much his film and he's just being kind and nice to me. I'm just Amrish puri of this film. We used to talk in Marathi. He being a Marathi and I can speak Marathi we enjoyed talking in Marathi. And he is a great man and it's amazing how with every dialogue; you give him just one line and he will turn that dialogue it an epic one. For example, if you say 'Aap ka kya haal hai' he'll even turn that dialogue into an epic one. I would say he adds entertainment in every dialogue and that is what was the epic thing that I like the most.

What you admire about him?

He is a very humble man and very professional, he is what he is. He is not worried about how his hair is and he comes in front of you as he is.

What was the one thing that you learned from Rajni Sir and what is that one quality that you would like to take from him?

What was your first reaction when you saw yourself in that get-up?

What was Nitara Kumar's reaction seeing you in complete makeup was she scared?

No no, she actually saw me through the makeup process and she knew something was happening to her father.

Considering the film is based on a large scale and huge budget are you nervous or are there any jitters?

Yes I am nervous about it I hope everything works the last I spoke to them, they were very happy man so already there is digital, satellite and this is a huge release now and it will be in Telugu Hindi and Tamil and overseas so he's happy I don't know how will they recover it he seems very happy with a glass of wine.

What was your take on Shankar narrating about your character?

He narrated the whole story I knew everybody's character so it was not that particular brief he gave me when he met me he narrated me the whole screenplay, the script that took me about 3 hours with him and when he narrated me half the time we were in office and half the time we were traveling in the car. And I was bowled over the concept as I said earlier also why hasn't anyone touched this topic.world is not only for humans, there is a big line in which animals and birds are saying listen its not only for you we are also alive here this earth doesn't belong to you it is us also because we can't speak and we don't do anything and take the advantage don't play with nature that is what the whole idea is. The world is not only for humans.

Is it the first regional film that you have been offered?

I did a Kannad film called Vishnu Vijaya.

Bollywood still has to explore the sci-fi genre, if you were to offer any other roles for the same, would you do that?

yes if anything comes surely I would love to. I would like to do a film on plague or something happens or the end of the world or a disaster film because of some kind of science which has gone wrong. there are a lot of things, you have a lot to play.

What was it that you learned from this film?

Yes, I've learned a lot, throughout the film. and I've also learned what a green screen can do to you. I can change your whole persona and the whole environment what power it has so the technology can actually change the environment. no wonder when I read about 300 when the whole film was made on a green screen and you can hardly see it but it's an amazing concept to do in green screen.

nikki.171 2 years ago OH GOD! This article is awfully curated. It needs to be edited asap.