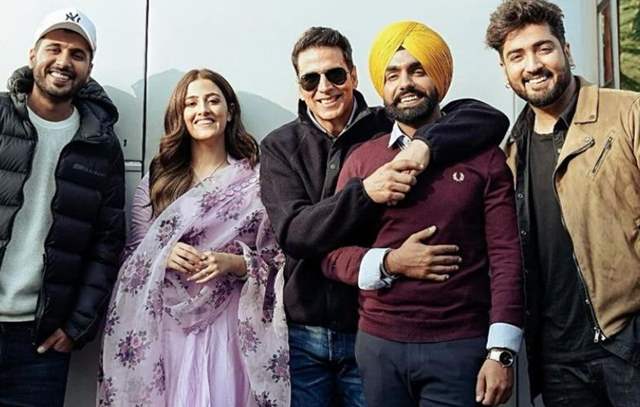 As the young starlet Nupur Sanon celebrates her birthday today, the actress enjoys a working birthday for the first time, beginning the shoot for the sequel of her chartbuster song 'Filhall'.

For the first time, a sequel for any music video is being shot in India and Nupur Sanon becomes the first actress to do so. Marking the occasion of her birthday, the team of Filhall commenced the shoot in Delhi, pictures of the same were shared by Nupur on her social media.

Sharing a picture with the team, Nupur wrote, " 15•12•2020 It’s my first working birthday as an actor!! (Smiling Angel Emoji) 😇 My heart is full and I’m so thankful to have spent my special day with such talented energies. (Golden Star Emoji) There couldn’t have been a better birthday gift from the universe than to have me on set in front of the camera.  The journey of #Filhall2 begins today. (Folded Hands Heart Emoji) @akshaykumar @ammyvirk @arvindrkhaira @bpraak @jaani777 @azeemdayani  #Thehappyteam #Gratitude"

Post the humungous success of 'Filhall', there has been great anticipation for the sequel as well as Nupur Sanon's bollywood debut. Recently, there have reports of Pooja Entertainment launching Nupur, being impressed by the music video.

The refreshing chemistry between Akshay Kumar and Nupur Sanon became the talk of the town soon after the release of Filhall and has been creating excitement amongst the audience for the sequel.