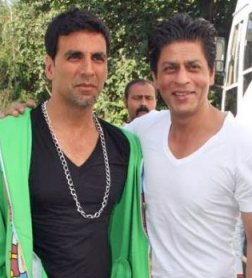 If you're beginning to get ideas, let them all flow in! 'Cause for the first time in these last few months, Shah Rukh Khan is in the news for reasons other than having added yet another name to his ever-growing enemy list!

This case is a polar opposite.

Very recently, King Khan housed a screening of the recently released comedy, Housefull, in his grand abode Mannat. Apparently, for all the critical reviews and legal mires that the movie has found itself in, it has finally earned itself its greatest yet admirer - the Badshah of tinsel town!

So impressed was SRK, that after the special screening he did not waste a moment to express his appreciation to the leading star of Housefull, Action Kumar Akki.

The SMS received was one huge surprise! Akshay Kumar, who has only ever shared formal colleague-like relations with Khan (and that is a nicer way to talk of their growing mutual competition!) was humbled at this gesture from Shah Rukh. A replying text, expressing his own gratitude, found its way back to SRK almost instantly. Additionally, Shah Rukh received an exclusive gift from Akshay Kumar, chosen out of wife Twinkle's artistically designed collection.

The summer has finally warmed one frosty bond in B-Town ... we can only hope for the trend to continue!