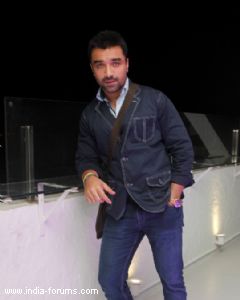 Rumours were rife Gauahar and Kushal, who were shooting for Khatron Ke Khiladi Darr ka Blockbuster in Cape Town, South Africa, decided to drop the show as soon as they came to know of Ajaz's participation.

Later Kushal had to quit the show reportedly due to his injury, but Gauahar continued.

At the recently held IAA Leadership Awards red carpet, when Ajaz was asked did Kushal quit the show because of you, he said: "Can you please tell me who are Kushal and Gauahar? There would be many beautiful girls in South Africa, then why would I meet Gauahar there?

"In fact, I pray to allah to keep them happy always, they get married and have eleven-twelve kids."

Ajaz created quite a furore on Bigg Boss when he showed his feelings for inmate Gauahar, who was already linked to Kushal on the reality show.

"I am a very secured person. I am happy in life. I don't have any problem with anybody," said Ajaz who is impressed with the show's host - filmmaker Rohit Shetty.

It will go on air on March 22 on Colors.

7 years ago Happy holi Gurmeet choudhary
Love u alotzz... May Allah bless u.

+ 3
7 years ago Gurmeet Choudhary loved ur IGT performance it was wonderful & the song is one of my favourite
& i'm so happy that u reached top 3 in KKK hope u hv won it :)
keep rocking

+ 4
7 years ago Gurmeet, waiting to hear the final result of KKK.
I'll try to watch it just for you.

+ 4
7 years ago Waiting to see your stunts in KKK, Gurmeet.

7 years ago Gurmeet Choudhary - You're SUPERB

+ 7
7 years ago Gurmeet waiting to see the stunts