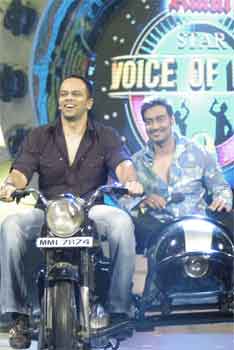 Featured Video
The Friday's episode called the Freaky Friday being the day of elimination, it was decided that neither the judges nor the audience will decide who will be eliminated, and it will be the contestants who will vote out one of them out. But the friendship between the girls, Ritisha & Saptaparna is so strong that instead of voting their friends they decided to vote themselves out.


Zaakir too decided to vote himself out rather than voting his friends out. It's not just great friendship which was encountered but also the spirit of competition was noticed. The boys, Vipul, Mallar & Ravi said that, "We are all friends but we are in a competition and we are here to compete with each other."


Mallar, Vipul & Ravi performed on Dil Chahta Hai which was loved by the judges, the guests and the audience.


As it was dosti special each contestant was asked about their best friends. Mallar said his best friend was Guitar and to his surprise Shaan gifted him a guitar. With that guitar he dedicated the song Omkara to Ajay Devgan. Sukhwinder Singh was too happy to hear it and joined Mallar on the stage.

Diwali Dhamaka 'Golmaal Returns' has proved to be this years highest grosser so far! Produced by Shree Ashtavinayak Cine Vision Ltd. and directed by Rohit Shetty, the sequel had the biggest opening and is still going strong!


Cashing in on the festive season, the holidays have proved to be a boon for the producers who have witnessed an ecstatic response to the hilarious roller coaster starring Ajay Devgan, Kareena Kapoor, Arshad Warsi, Amrita Arora, Shreyas Talpade, Celina Jaitley, Tusshar Kapoor and Anjana Sukhani.