Jungle fever has never been more contagious. Every cor 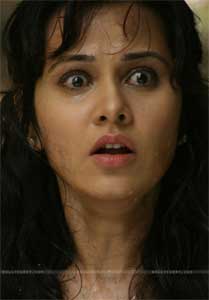 Featured Video
ner of the Sri Lankan jungle in 'Agyaat', as shot with mesmeric skill by cinematographer Surjodeep Ghosh, is filled with danger.


There lurks a diabolic unknown ('agyaat') monster in the treacherous greenery. Ram Gopal Varma has always been a master of manipulative terror. His camara range is constantly petrifying and persistently resonant. The sequences in 'Agyaat' are ceaselessly shot in a way that suggests the presence of lethal characters and entities whom we and the people on screen cannot see...only feel.


In this endeavour to evoke ghoulish visions of omnipresent danger, Varma is vastly aided by the sound design.


Sound designers Dwarak Warrier and Leslie Fernandes go easy on the eerie sounds and beguiling banshees. Instead there are chilling eruptions of noises that you probably hear in the wilderness but don't pay attention to as being anything remarkable. The sound also includes snatches from Hemant Kumar Mukherjee's immortal 'Kahin deep jale kahin dil' from the old 'Bees Saal Baad'.


But this is well into the new millennium. The perils of modern life such as cut-throat competitiveness often lead to the throat being literally cut.


Who knows who's killing the film unit in 'Agyaat'? Maybe it's their own fears and ambitions that are killing them. And the crew's calm cinematographer (Kali Prasad Mukherjee) finally commits suicide. The spoilt bratty superstar's spotboy (Ishteyak) is pulled into a gruesome death even as he chants mantras to protect himself.


While in Varma's previous comparatively-tacky horror outing 'Phoonk', god felled the devil, in 'Agyaat' nothing works. You are doomed in the jungle. No force can protect you.


As one member after another of the film-within-film gets eliminated, Varma seems to be spoofing Agatha Christie's '10 Little Indians'.


There are dollops of tantalizing irony in the way the typical and tight hierarchy in a film unit evaporates as imminent peril puts people in perilous positions. The repressed spotboy's outburst against the spoilt superstar played by Gautam Rode, every inch the despicable brat, is a masterly manoeuvre designed to show how fear melts all class differences.


Portions of the brief supernatural whodunit are unintentionally funny. But all said and done, 'Agyaat' gives us enough spine-chilling moments to make us wonder at the end, who the hell is killing all these people???


The grisly plot weaves in humane moments. Nitin Reddy, who makes his Bollywood debut with this film, is confident, honest and has a skilful body language. He and his assistant Sameera (Rasika Duggal) have this very believable bonding that perhaps Shah Rukh Khan and Karisma Kapoor had in 'Dil To Pagal Hai'.