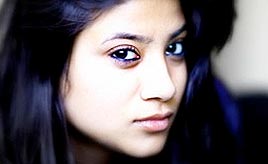 Shamika Tomar, who was born here, has bagged two short Hollywood films within 15 months of her stay in the US. Her future plans are to make "quality" movies in India.

When she flew to Los Angeles, little did she know whether her decision to pursue her dream was the right thing to do.

Her parents were apprehensive about her career plans, but her determination yielded results and she got "Awaken" and "On the Verge".

" 'Awaken' is the story of a young girl, who faces life-changing consequences of drunken driving by losing her best friend. The remorse and guilt leads her on the path of artistic epiphany and lends a new meaning to her life," Shamila told IANS.

In both the films Shilpa Tripathi, Miss India Universe runner up, plays the central roles.

"On the Verge" is about Marie, a girl who sneaks out of her house without her mother's consent on a holiday with her boyfriend, who betrays her," said Shamika.

"She is trapped in a human trafficking racket. The experience teaches her a lesson for her life," added the youngster who joined New York Film Academy after completing her schooling from Modern School, Barakhamba Road, in New Delhi.

She graduated in one-year filmmaking certificate programme with major in producing and directing.

As a creative person Shamika also loves to dance and paint. "I write poems and movies have piqued my interest since I was a child."

Talking about her future plans, Shamika said, "I want to learn from Hollywood as much as I can and make quality movies in India."

"The quality of movies made in India and US is not comparable. India still lacks behind technically and I want to improve that and educate and entertain people at the same time through my storytelling.

"I've already graduated from the film school. Now, I'm just practicing my skills and sharpening my craft. Once I have that experience, I'm willing to make that change that I want to see in Indian Cinema."

Amanda Seyfried Announces The Birth of Second Baby
43 minutes ago

NCB Dismisses Rhea's Claim of 'No Jurisdiction in Drugs ...
44 minutes ago