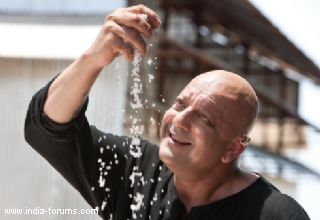 Mumbai, Aug 30 More than a remake, the new 'Agneepath' is a tribute, says filmmaker Karan Johar, whose late father Yash Johar had made the original 1990 movie.

'Agneepath' is not a remake because it is a tribute,' Johar told reporters here Monday at the launch of the new version's trailer.

Actors Hrithik Roshan, Sanjay Dutt, Priyanka Chopra and Rishi Kapoor, who play key roles in the movie, were present at the launch.

For Karan, remaking 'Agneepath' was an emotional decision as he wanted it to be a commercial hit. His father's version of the film had failed to click at the box office even though it had won a national award for Amitabh Bachchan for his performance in the role of the angry young man, Vijay Dinanath Chauhan.

The 39-year-old filmmaker says in his version of 'Agneepath', which has been directed by first-timer Karan Malhotra, he has added a lot more to the script.

'The basic plot of 'Agneepath' is the same, and the character sketch of the protagonist, Vijay (Hrithik) and antagonist Kaancha Cheena (Sanjay) is the same, but we have built new angles to it, and have added new characters to the script as well,' he said.