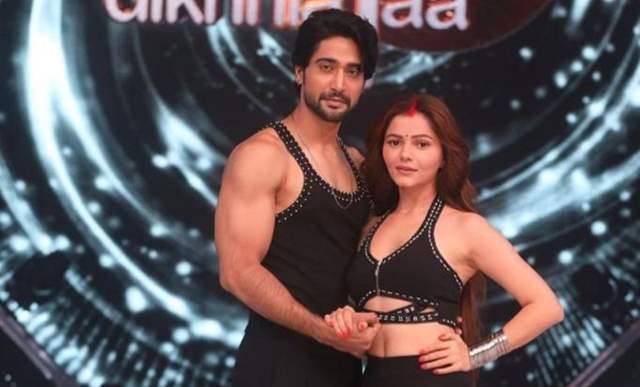 Jhalak Dikhhla Jaa makes a comeback after 5 years, this time bigger & better and 4 weeks into it , the competition is only getting tougher.

Rubina Dilaik, choreographed by Sanam Johar, one of the biggest faces on the show this season, started on a good note with applause from all judges alike & for other two consecutive weeks put up a decent act. Last weeked the duo broke all of their earlier records, taking home perfect 30 scores with their Silk & Blind fold act, during which Rubina's blind fold has supposedly come off but the actress continued to perform with closed eyes. Sanam sure does know to bring out the best from his artists.

This week, Rubina & Sanam are seen in a Pahadi attire, looks like they were influenced by the former's roots as Rubina hails from Himachal. But what stole the show was what transpired after. The set welcomed a group of eunuchs, who came to bless the duo. For the uninitiated, Rubina was a part of a hit show, where her character was a eunuch. Rubina received critical acclaim for the role.

Rubina and Sanam surely received blessings & we'll find out more about the performance this weekend. Stay tuned for more updates.

+ 3
4 months ago all these reality shows r suck fake things..y call enuch to bless them & all, they r not married pairs for that...too much nonsense...thats y i never watch any of these stupid reality shows

+ 7
4 months ago I am sorry but what?? Dance ko chodke har tarah ka drama hai yahan shayad.. yes she played a character but why go forward in past fame..let the dance do the talking na