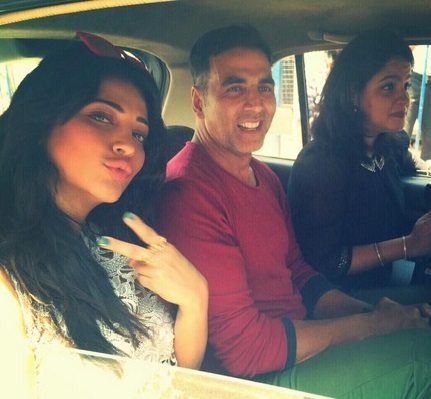 Akshay Kumar is promoting is his film in every possible manner to reach the masses.

He picked local transports for the promotions of his film. Earlier he was snapped giving an interview in a rickshaw while going for another interview. The next is Taxi! Yes, Akshay was seen travelling in a taxi. He tweeted, "Off for another interview on Bombay's highway!! Today it's a taxi (how I miss my old life) Watch out for #TeamGabbar" with  a picture of Shruti Hassan and himself.

As the tweet says, he misses his old days of travelling by taxis!

Gabbar is Back is his upcoming film produced by Sanjay Leela Bhansali and Viacom 18 Motion Pictures. Featuring Akshay Kumar in the title role, the film is a remake of the Tamil film Ramana.

The track was so unnecessary and the way they've made the biggest fear gripping the women-kind, a joke is beyond sick.

+ 2
2 years ago Utterly disgusted that rape was carelessly once again utilised and washed over as a mere plot device for drama. When the hell are they going to start taking issues around women's safety and sexual violence seriously.

ggr8guy 2 years ago They really need to stop using rape as a thoughtless device to move the plot forward, especially in shows such as Naagin which were supposed to show us empowered female subjectivities. This is extremely sad and offensive. As it is, they have been extremely unfair to Vish's character. They should have just eliminated her character instead of using it to catalyze a dead and confused plot. Shame!

2 years ago Bang on!!
Thankyou India Forum for this article
Yes I know this article cannot save Naagin3 anymore as it will deteriorate more
Also creative director of N3 Mukta Dhond's reply here shows she is such an arrogant lady who will never accept her fault.
Instead of correcting it she is replying rudely
Self centred lady!!
Naagin3 destroyed
It ia not supernatural show anymore
After back to back crap I hold on to N3 but now not anymore.
What she thinks or herself?
This bloody cheap character Hukum impregnated Vish who was in form of Bela not in her sense and it was not rape
And the other day BeHir being lovey dovey Vish in normal as if it was casual thing
Illiterate writers
Senseless

2 years ago Everything said above is right...This is just disgusting,We lost everything including our BeHir,Vishrant,naagrani,hamari Mahirji,She destroyed everything leaving nothing remained...She maybe able to give some lame excuses,but nothing can be got back

+ 2
2 years ago I totally agree with all comments by fans.

Rape is a serious matter ... Be it Bela or Vish showing something to a girl to save other lead girl ... M speechless what was creatives thinking :( so shamefull

Don't want to comment on mahir so disgusting wat was shown afterwards a girl got raped :(