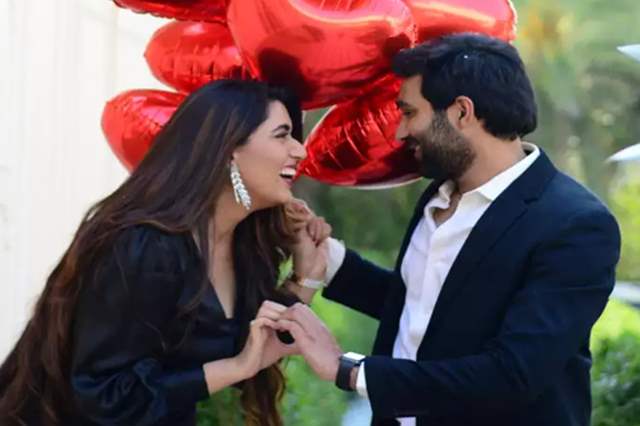 Love is in the air for actor Shireen Mirza and it continues to be even right now where after revealing about her relationship, she has now received an amazing proposal from her partner, Hasan.

In fact, her proposal was pretty much straight out of a Bollywood film where Hasan flew all the down to Jaipur to propose her.

Hasan, who lives in Delhi and is an It guy flew down to Jaipur to go on his knees to propose to Mirza. The man also met his future son-in-laws while he was there and spent some time with them. Mirza, on the other hand was also planning a surprise for him and hosted a special lunch for him after she was proposed with a diamond ring.

Talking about it with Times of India, Mirza said,  “Valentine’s Day has never been so special for me but this time, it became the most memorable one because of Hasan. Actually, I wanted to make him feel very special and booked this entire property. I had been planning this for more than two weeks with decorators, photographers and event planners, and wanted to do something brilliant on our first Valentine’s together."

She added,  “He came a day before and checked into a hotel. On Valentine’s Day, I took him to the guest house, where we were given a royal welcome. Rose petals were showered on us, and the place was decked up with red roses and red coloured heart-shaped balloons, ensuring such a great feeling! When we entered, he was completely in awe and surprised.” She recollected, “When Hasan asked me to turn around, I saw him getting down on one knee and asked, “What are you doing!?” And then, tears welled up in my eyes. Hasan asked me, “Will you marry me?” And I said ‘Yes’. It was the easiest decision that I’ve ever made. It was so much like what we watch in Bollywood films!”

Talking about marriage plans, Mirza said,  “Marriage is definitely on our minds and we have spoken about it with our parents too. Most probably, we will get hitched this year itself. I can only say that fairytales are for real! I’ve prayed for a guy like him and life definitely has more in store for us, Inshallah!”