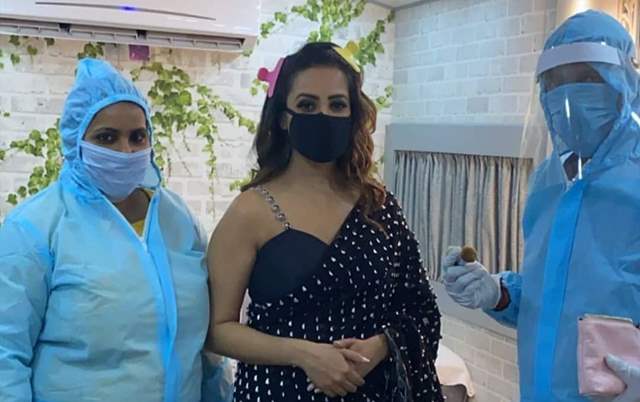 The Television shows have finally resumed their shoots by taking all the precautionary measures and ensuring complete safety of it's cast and crew. The makers are also coming up with various twists and turns and are all set to soon air the fresh episodes of the shows. Earlier, it was reported that the cast of Naagin 4 has already begun shooting for the final few episodes. Nia Sharma and Rashami Desai had already started shooting for the season finale weeks back.

Now, Anita Hassanandani who plays the role of Vishakha in the show has also resumed shooting. There have been several pictures of Anita from the sets doing their rounds on social media. In the picture, Anita is seen in a black saree with a black mask, taking the precautionary measures and being responsible.

Producer Ekta Kapoor had already announced the new season of Naagin and several big names from the industry have been speculated to be a part of Naagin 5. It will be interesting to see who will be roped in for the next edition of the show.

What do you guys think of the above news? Are you guys excited to watch the fresh episodes of your favourite Television shows once again? Do let us know if your views on the same in the comments section below.

Ayushmann Khurrana Reacts to Being Voted as One of the Most ...
46 minutes ago