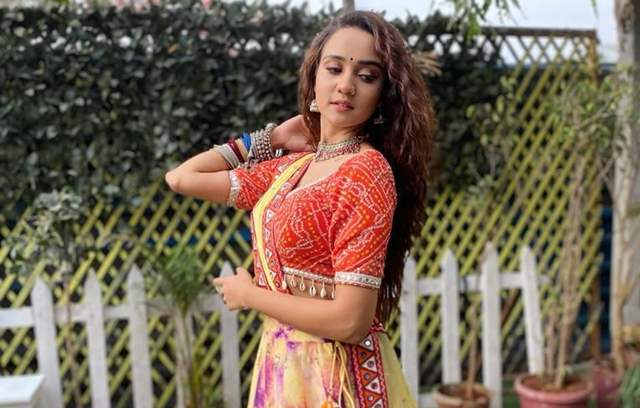 Zee TV's popular fiction show, Meet, has made a special place for itself in the audience's hearts since its premiere. The inspirational show presents the story of Meet Hooda (Ashi Singh), who mirrors several women across the nation, fighting societal norms of gender roles regarding work and responsibilities. While Ashi Singh has been acing the role of Meet Hooda, it looks like the viewers are in love with her post-leap avatar of Manjari as well.

For the uninitiated, Meet took a one-year leap recently with Ashi Singh now playing the role of Manjari who is a coy, Gujarati girl. While she looks exactly like Meet Hooda, she is quite the opposite in terms of her characteristics. She is a Garba dancer who stays with her grandmother and loves to dress up and dance to any tune. We all know how every actor goes through umpteen number of trials and workshops while prepping for a character and understanding its nuances. The same was the case with Ashi Singh, but the actress was determined to get everything right. While it was difficult for her to adapt the Gujarati dialect for the role of Manjari, she worked round the clock to adapt to it and get the dialect right for the new character.

As Ashi Singh reveals, “Meet has been a great challenge for me ever since I signed up for it. First, to get into the character of Meet Hooda, I had to learn and get my Haryanvi accent right. And now I am working hard towards adapting to the correct Gujarati dialect to play the role of Manjari. I believe that the show has kept me on my toes and has helped me grow as an actor at every step. Having said that, it has been a little difficult to get the Gujarati accent right! It is not as easy as it sounds, but the whole team of Meet has been incredibly supportive. They have been helping me pick up the right pronunciations for difficult words. I must also mention that this whole learning process has been fun for me, and I am giving my best to present the character as authentically as possible. I hope the audience also loves Manjari as much as they have loved Meet Hooda.”

While Ashi is putting her best foot forward, Manjari’s entry into the Ahlawat house will bring about several twists and turns. In the upcoming episodes, viewers will see Manjari trying to fulfil Rajvardhan's wish of meeting Meet Hooda once again before his death. But will she be successful in acting as Meet? Or will her true identity come out in front of the whole family?

+ 8
2 months ago this is one thing itv needs to get rid of. randomly running into your twin that is not biologically your twin

+ 3
2 months ago before his death? Rajvardhan is not dying .. he is just sick and was longing to see her daughter in law Meet Hooda ….