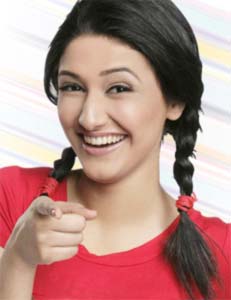 Govinda's niece Ragini Khanna, who plays the lead role in Sony TV's 'Bhaskar Bharti' is the next after his daughter Narmadaa Ahuja to take the plunge into the Hindi film industry.


While Ragini has disclosed the banner and name of the film she might get involved in, details of Narmadaa's project are still under wraps.


'I was receiving offers since a long time. Then this film 'Mare Mere Dushman' was offered to me by Sri Adhikari Brothers and I thought 'let's do it'. It's a dark comedy. My role is of a small town and village girl. But right now it's too early to talk about the project in detail,' said Ragini who is the daughter of Govinda's elder sister Kamini, who is a writer.


Talking about her role in 'Bhaskar Bharti', she said: 'The fun part about the show is that it is about a woman in a man's world. I have got good responses for my acting,' she said.


According to the actress, who wanted to be a singer initially, it took her a lot of preparation to play her part in 'Bhaskar Bharti'.


'I had to learn the mannerisms of men, their thought process and then adjust my actions and reactions accordingly. I also observed Eijaz Khan for six to seven days in the initial episodes when he played the male version of my character,' said Ragini.