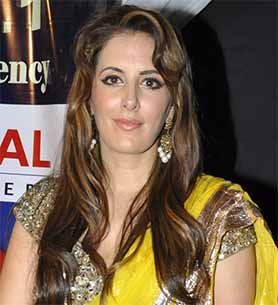 "The market in India for resortwear has become huge. I have been part of many international shows and I can say that from international point of view that India in terms of fashion has only two choices - one is Indianwear and the other is resortwear," Puri told IANS on the sidelines of the first day of IRFW 2013.

"Indian fashion is known around the world for its resortwear and Indian designers are also known for their resortwear creations," she added.

Known for her sensuous and glamorous kaftans, Puri impressed the audience at IRFW 2013 with her Lust line. It includes her signature kaftans and swimwear but a unique thing about her designs this time was the use of belts, slits and antique gold lace which added a feminine touch to the garments.

Puri believes the collection serves a dual purpose - as beachwear and partywear too.

"The prints are vibrant and exotic with a more floral and Persian look to it. The collection is very glamorous, sensuous and sexy and apt for both beach and party look.

"All the fabrics are silk or crepe, which are usually my choice of fabric for last ten years. The prints are exclusively done and designed by me," said the designer.

The first show of IRFW 2013 here started well with people flocking in from various areas of Mumbai to be a part of the fashion gala. Actress Celina Jaitley added some Bollywood quotient as she was spotted sporting a knee-length dress.

Nawazuddin Siddiqui shares the best compliment he received ...
58 minutes ago