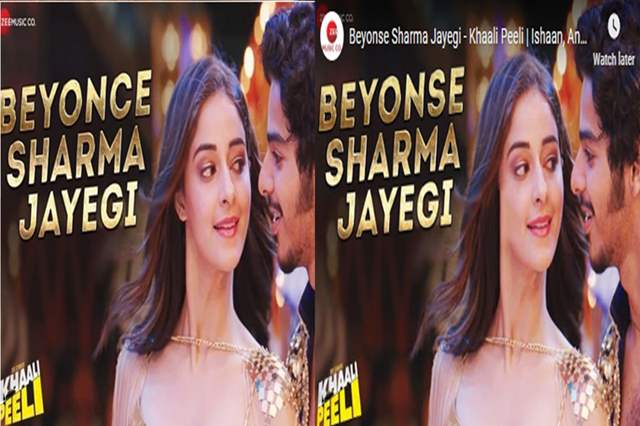 The makers of Ishaan Khatter-Ananya Panday starrer Khaali Peeli might not have anticipated the immense controversy that arrived with the song, Beyonce Sharma Jayegi recently. The song composed by Vishal- Shekhar, has been penned by Kumaar and Raj Shekhar, and within hours of its release, the song faced backlash on social media for its lyrics.

It features the lyrics, “Ho tujhe dekh ke goriya, Beyonce sharma jaayegi (Seeing you O fair woman, even Beyonce would feel embarrassed).” Many objected to the use of ‘goriya’ in the song, especially comparing it to an iconic black woman and even termed it be classifying colorism and called racist.

Now, after all this backlash, the title of the song has been slightly tweaked and the thumbnail of the song has also been changed. ‘Beyonce’ was changed to ‘Beyonse’, and the title now reads, ‘Beyonse Sharma Jayegi.’ Meanwhile, recently, Khaali Peeli director Maqbool Khan broke his silence on the issue and explained the reference of the word ‘goriya’ which was used in the song. He did apologize to all those who were offended and assured that the lyric in question was not intended racially. He said that the word ‘goriya’ has been so often used in Indian songs to address a girl, that it didn’t occur to interpret it in a literal way.

“Also the comparison with Beyonce is simply meant to be a street-smart guy flattering a girl who is trying to impress that her dancing/performance is worth comparing to even Beyonce who we all see as the final word, the epitome of talent, beauty, performance, style and attitude. We are all huge fans, and there was never any question of disrespect”, he said.

Neonholic 1 months ago After listening to this song, i feel like Dhinchak Pooja is still an option to be considered rather than this ! TRASH LYRICS !!!

PerfectStart 1 months ago How they even come up with such absurd and senseless stuff to write??? I mean like seriously, is there nothing left to write for songs?

RapChick101 1 months ago The lyrics are even otherwise, sad.