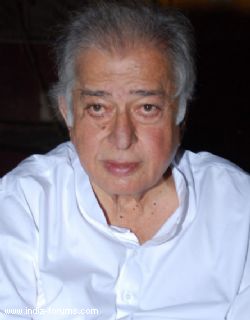 The much-praised film had a most unexpected patron in wheelchair-bound Shashi Monday evening.

The 73-year-old, who emblazoned his name across the marquee with romantic musicals in the 1960s, has a very intense emotional connectivity with 'Rockstar' -- it is his elder brother Shammi's last screen appearance and also features his grand-nephew, Ranbir.

So this one, Shashi had to see.

'Because of his failing health and immobility, Shashiji has not been to see a movie in a theatre for the last 10 years,' said a source.

'Of course he watches films at home. But for 'Rockstar', Shashiji insisted on going to the theatre, no matter how much of an effort it took him.'

'Shashiji wanted to see his brother's ultimate screen appearance. He also wanted to watch Ranbir whom he had not seen on screen so far,' the source added.

The source said Shashi took all his beloved staffers from Prithvi Theatre to the movie with him.

The cineaste brought a new kind of romantic hero in cinema, did international projects with the world's top directors and championed art house cinema with films like '36 Chowringhee Lane', 'Junoon' and 'Utsav'

His nephew and Ranbir's farther Rishi Kapoor said: 'My uncle had not been to a theatre for over 10 years. He went and saw 'Rockstar', and he liked Ranbir's work. We are all enjoying the response the film has received.'