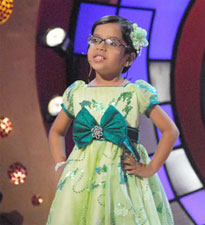 This week's episode of Zee's SaReGaMaPa L'il Champs will remain a memorable one for the little host of the show, Afsha Musani, who celebrated her birthday on the sets in a grand manner.

Reports our source from the sets, "The entire crew, including the judges and co-contestants were enthusiastic in celebrating the birthday of Afsha. The girl also received her share of gifts in the process. Alkaji gifted her with a cute Barbie doll, while the contestants gave her laddoos and various other gifts".

"Popular singer Kavita Krishnamurthy who comes in as the celebrity judge this week was simply amazed to see the tiny-tot hosts of the show, and she dedicated a special medley of her hit songs to the birthday girl", adds our source.

However, Afsha brought tears rolling down her mom's cheeks when she presented her with a return gift. "Afsha told all that she would like to dedicate a song to her mother on this special day, and the song was the touching number 'Yeh Bandhan Toh Pyaar ka Bandhan Hai'…, which moved her mom so much that she started to weep", further states our source.

We wish the cute little chatterbox all the success in life…

Mishta 11 years ago A very happy birthday to you sweet lil bun! You lighten this mind blowing show very well. I and my family wish you happiness and progress always!

Oops I meant a very blessed birthday to our sweet lil bak-bak machine;-)

radhika_21 11 years ago she is soo cute!
happy belated birthday 2 her!

urvash 11 years ago i think she is just outstanding, mindblowing and history. she is such a find for SAREGAMAPA. i wish her all the best on her birthday. may her natural talent be nurtured. i just love this girl.

larki_punjaban 11 years ago i just love this bak bak mashione!!

i love afsha she is soooo cute!!!!

happy99 11 years ago kabhi_21 you must watch lil champs that the show organiser make sure that these kids does not come every time as soon as contestants finish the song but once after three contestant finish the song only to do some joke and say "its brake time".