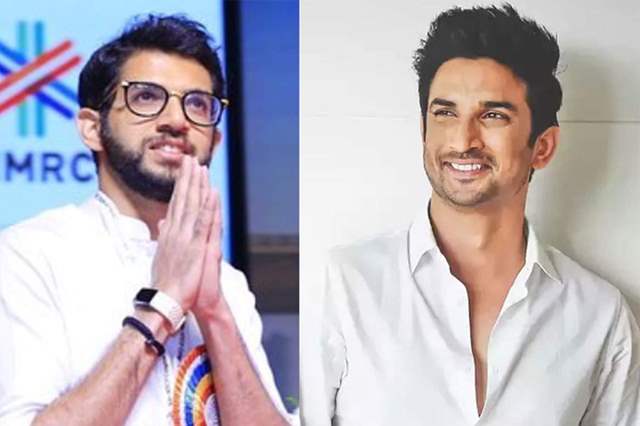 Even though the saga surrounding actor Sushant Singh Rajput's passing away continues to unravel with shocking developments every passing day, new names also keep coming in one way or the other to be associated with the incident. It is also no secret how the issues has become political in several ways too as multiple politicians have come forward to probe inquiries in CBI amongst other things.

One name that has been rather prevalent in his connection to Bollywood has been Shiv Sena leader, Aditya Thackeray. The young leader has been known to and having multiple friends in the Bollywood industry. And hence, he recently mentioned on Tuesday and he and his family are unnecessarily being targeted in Rajput's passing away and reiterated that he is in no connection to the matter in any manner.

He said that dirty politics are being played following Rajput's death and without naming anyone, he said that allegation being leveled is political stomach-ache from frustration too.

According to Outlook India, In a statement he shared on Twitter, Aaditya Thackeray said the Maharashtra government is making all the efforts to combat COVID-19 and perhaps those who are sulking due to the MVAs popularity have started playing the dirty politics in connection with the death case.

"Mud-slinging is being indulged in against me and the Thackeray family for no reason in connection with Sushants suicide. This is a kind of political stomach-ache stemming from frustration. It is a blot on humanity to seek mileage out of someone's death. In fact, I am nowhere related to this episode," Aaditya Thackeray asserted.

He said Bollywood is an important part of Mumbai and thousands of people are dependent on the film industry for employment.

The 30-year-old son of Chief Minister Uddhav Thackeray said he shares cordial rapport with many people from Bollywood and added it is no crime.

He claimed efforts are being made to divert the probe into Rajput's death, an episode being investigated separately by the Mumbai police and their Patna counterparts.

Aaditya Thackeray further said Rajput's death is unfortunate and equally shocking and added the Mumbai Police are probing the matter in detail.

The Maharashtra Police is reputed in the world. But those who do not believe in law are stoking dust of baseless allegations to divert the probe.

As a grandson of Hinduhridaysamrat (King of Hindus' heart) Balasaheb Thackeray, I want to tell, that I will not commit any act that will harm the reputation of Maharashtra, the Shiv Sena, and the Thackeray family.

Those who are making baseless allegations should understand this, he said.

The minister further said anyone who has special information regarding the case should submit it to the police who will definitely probe in that direction.

I am exercising restraint in this case even today. None should remain under the illusion that the government and Thackeray family can be defamed by engaging in mud-slinging thus. This much for now, he added.

Earlier in the day, BJP leader Narayan Rane had said Rajput's death should be probed as "murder".

Yami Gautam and Vikrant Massey collaborate for Mohsin ...
10 minutes ago

review
Review The Confession Review: The film Relieves all the Serial ...
31 minutes ago