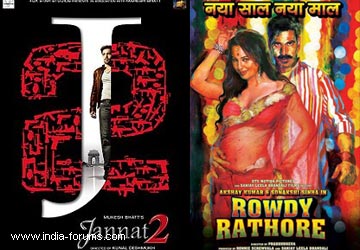 Movie aficianados are in for a summer delight! From Hollywood treats like "The Avengers" and "Madagascar 3" to Bollywood potboilers like "Jannat 2" and "Rowdy Rathore", a heady mix of romance, drama, action and comedy await movie-goers this holiday season.

"We have got two of the most eagerly awaited releases lined up. We are bringing Oscar winning film 'Hugo 3D' on popular demand to India in May and 'Madagascar 3' in June. We are expecting great response for our releases in the holiday season," Vikram Malhotra, COO of Viacom18 Motion Pictures, told IANS.

Set in 1930s Paris, the Oscar winning film "Hugo" tells the tale of an orphan who lives within the walls of a train station and is wrapped in a mystery involving his late father and an automaton, while "Madagacar 3" narrates the story of Alex the lion, Marty the zebra, Gloria the hippo, and Melman the giraffe, who fight to get home to their beloved New York.

"'Madagascar 3' is one of the most loved franchises. The previous two films of this franchise have received tremendous response from people across all ages and we are expecting the third one to be equally successful," Malhotra said.

"'Hugo 3D' will have limited but loyal audience. There is a lot of curiosity among people for this film," he added.

"The Avengers" is another big Hollywood release this summer. Distributed by UTV Motion Pictures, the film is going to hit 800 Indian screens, a record number of screens for any Hollywood film in India so far. It is also dubbed in Hindi, Tamil and Telugu.

"'The Avengers' is a superhero film and we are expecting a really good response after its release, more so as it is releasing first in India than in the US," said Gaurav Verma, vice president, distribution, India, UTV Motion Pictures.

"We expect a good viewership as the film is releasing in four different languages, which in turn expands the reach too. Other Hollywood films lined up for release this summer are 'Spider Man' and 'Batman'," he added.

Bollywood is not far behind. The month of May will see films like "Jannat 2", "The Forest", "Dangerous Ishq", "Ishaqzaade" and "Department" hitting the screens, June will see films like "Rowdy Rathore", "Shanghai", "Ferrari Ki Sawaari", "Gangs of Wasseypur" and "Teri Meri Kahaani" entertaining the audience.

"The line up of Bollywood films this summer are very interesting. There are films like 'Rowdy Rathore', 'Ishaqzaade' and 'Department' hitting the screens. Our big Bollywood release this summer is 'Rowdy Rathore' with Akshay Kumar and we have huge expectations from it too," said Verma.

While a majority of Hollywood films releasing this holiday season target children, Bollywood barely has anything to offer them.

"In Hindi film industry, there is no specific genre of children films because it is typical masala films that work here. Children films here are of lowest common denomination," said Malhotra.

However, Verma says Bollywood films have universal appeal and don't cater to a particular segment.

"Hindi films have universal appeal and they are barely targeted towards a specific segment of audience. So it is a myth that films for children are not being made in India," he added.