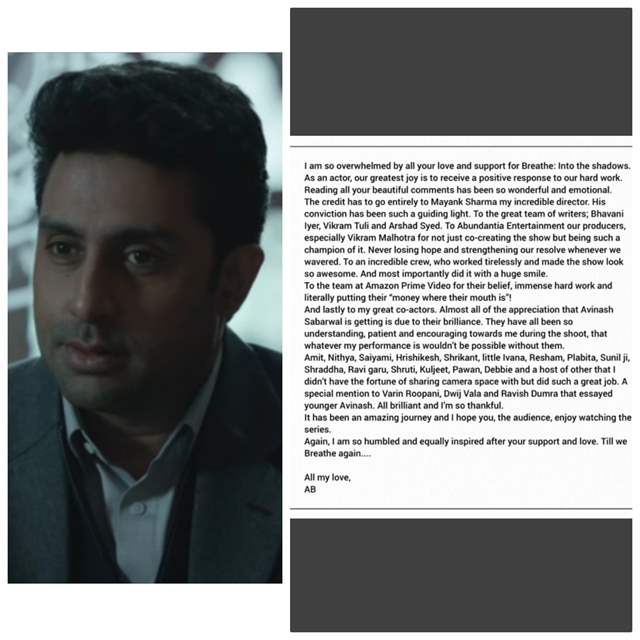 It has been just over 24 hours since Amazon Prime Video's second season of Breathe and a new chapter in itself called Breathe: Into The Shadows released. Even though, the critical response for the show has been mixed, a common thread in it has been the immense love, appreciation and compliments that actors Abhishek Bachchan, Amit Sadh, Nitya Menen and others have received.

While Sadh is a web regular, this certainly is a new saga for Bachchan who made his web debut with this show. There has been a range of conversations about how Bachchan is indeed one of the fine actors we have but has been terribly underrated over the years.

His performance in Breathe Into The Shadows is another reminder as to what he is indeed capable of and should be at the helm of good shows and films a lot more. And while you might or might not have your own take for the show so far, it seems that Bachchan is indeed overwhelmed by the response he has gotten so far.

The actor went on to pen a note for thr incredible response he has gotten for the show and in the same note, he made sure to not just thank the viewers for the love but the makers of the show and names every cast member he shared scenes with.

From gratitude to spreading love, here's what Bachchan had to say about the same-

Have you seen Breathe Into the Shadows so far? What did you think? Leave in your comments below.

CINTAA ties up with Zindagi Helpline for combating suicides, ...
6 minutes ago

Sushant Singh Rajput Revealing about the Moment he Got Very ...
6 minutes ago