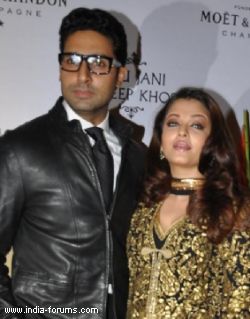 New Delhi, Nov 16 The Bachchan family is ecstatic about the birth of Abhishek and Aishwarya's first child, a baby girl in Mumbai, Wednesday morning. The news also spread cheer among many Bollywood celebrities, who sent out good wishes for their new bundle of joy.

Former Miss World Aishwarya Rai Bachchan, 38, was admitted to the Seven Hills hospital in Andheri, Mumbai, Monday night. The child was delivered in a normal manner a few minutes before 10 a.m. Wednesday.

As soon as the baby was born, Abhishek Bachchan tweeted: 'IT'S A GIRL!!!!!! :-)))))', while his father, megastar Amitabh Bachchan, shared his excitement on becoming a grandfather.

'I AM DADA to the cutest baby girl, A dada ji ... Ecstatic,' posted the 69-year-old, who already has two grandchildren - Agastya and Navya Naveli, children of his daughter Shweta and son-in-law Nikhil Nanda.

Ash and the baby are doing 'great', according to Abhishek, who has been by his wife's side ever since she was admitted to the hospital. He hasn't slept well because he is 'too excited'.

The Bachchan family has been recieving good wishes for the new addition.

Some family friends like former Samajwadi Party leader Amar Singh, filmmaker Goldie Behl and his wife Sonali Bendre, as well as filmmakers Apoorva Lakhia and Bunty Walia, visited the hospital to meet the 'Baby B'. Singh was one of the first ones to visit the newborn at the hospital, which had tight security arrangements.

'Bachchan parivaar ko bohot bohot badhaai. Unke ghar mein Lakshmi aayi. (Many congratulations to the Bachchan family. Lakshmi has come into their house),' wrote Mangeshkar, while Johar tweeted: 'Congratulations!! Baby B had a baby girl!! @juniorbachchan!!! All the love and happiness...am sure she will be the prettiest girl ever!!!'

Arjun, a father of two daughters, posted: 'Congratulations daddy cool @juniorbachchan and the coolest Dadaji @SrBachchan and the most beautiful mommy Ash and the lovely dadi Jayaji.'

Both Abhishek and Amitabh have thanked everyone for their wishes.

Aishwarya tied the knot with Abhishek in April 2007, and the event had grabbed a lot of media attention back then.

Ever since then, be it Aishwarya's baby shower, Karva Chauth or Diwali -- all such events at the Bachchan household attracted mass media coverage in the recent past. However, a 10-point advisory issued to TV channel heads by the Broadcasting Editor's Association (BEA) curtailed the electronic news coverage regarding the high-profile childbirth.

Now, Amitabh is expected to address a press conference in Mumbai either Wednesday night or Thursday morning.