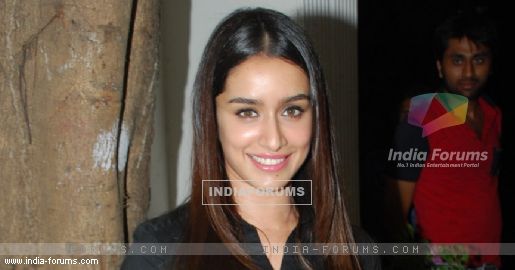 Actress Shraddha Kapoor, who has delivered some smashing and energetic dance forms in the recently released trailer of Remo D'Souza's dance-based film "ABCD 2", says she had to undergo extensive rehearsals for the role.

For her, "the whole film has been a training period".

"This whole film has been a training period for me. I have undergone changes both physically and mentally," Shraddha said here Tuesday during the promotion of the film on the sets of dance reality TV show "Dance India Dance Super Moms".

"A lot of rehearsals were done for the film. I even suffered a minor injury," she added.

"ABCD 2" is a sequel to Remo's 2013 dance-based film "ABCD-AnyBody Can Dance". It also features choreographer-director Prabhudheva and Lauren Gottlieb along with others.

Shraddha, 26, is so impressed with Remo and Prabhudheva's dancing skills that she considers them as her dance gurus.

"Remo sir and Prabhu sir are my dance gurus now. Whatever we (Varun and I) have got to learn from them during this film is amazing," Shraddha, who is working for the first time with Remo D'Souza and Prabhudheva, said.

"Being directed by Remo (D'Souza) sir and watching Prabhudheva sir performing live is like a surprise. The ease with which he dances, is superb," she added.