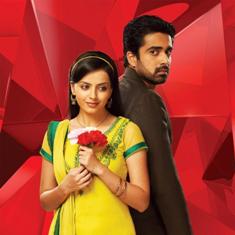 The life of Aastha has taken a U turn in Sphere Origin's popular show Iss Pyaar Ko Kya Naam Doon... Ek Baar Phir. Recently we have seen that the lovebirds Shlok and Aastha got married to each other even though their families were against it.

Now, Aastha (Shrenu Parikh) is shattered to know the truth of Shlok (Avinash Sachdev). A lot more is going to happen with Aastha after this revelation in the upcoming episodes of the show.

Our source says, "In the upcoming tracks of the show, Shlok will tell everything to Aastha as it was all planned by him to take revenge from Aastha and today he is quite happy about it. Aastha is taken back to know that Shlok has never loved her and always hated her. Aastha decides to leave the house but she was stopped by Shlok who blackmails her about her father that he will put him behind the bars. After this Shlok finds Aastha missing from the home."

Where did Aastha go missing? Will Shlok be able to find Aastha and what has destiny written for both of them?

The upcoming tracks of the show will unearth the answers to these questions.

.Biggi. 6 years ago Shrenu Parikh is sweet,cute and beautiful.

Love her so much as Aastha in Iss Pyaar ko kya naam doon...ek baar phir!!!

RuchiArora21 6 years ago avinash sachdev you r a mind blowing actor in every way...love ur acting and expressions

yanks28 6 years ago what a pathetic and regressive show, that guy is so creepy and I feel like vomiting whenever he touches that poor girl. I hope this show tries to send a positive message and this girl gets a divorce from this MCP instead of kissing his feet and trying to fix his sick family.

Horia_2012 6 years ago Shlok is a person with so much hate. He doesn't deserve Aashta's love at all! What kind of person marries another person just to get back on them. I think this is a sick joke and i hate Shlok alot! He doesn't value marriage at all! I hope Aashta divorces him and marries a sweet person like Arnav Singh Raizada not the devil she is married now with!

Sushant’s sister Shweta Singh Kriti shares a video of a fan ...
48 minutes ago