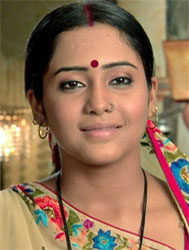 Aasiya Kazi who debuted on television as Santo in Imagine's Bandini opposite Ronit Roy is back, in a new avatar.

It seems as though Aasiya has now put behind the sacrificing nature that was in the blood of Santo, and has opted for a role that brings across a new challenge for her..

The latest is that Aasiya will now be seen in COLORS and Hema Malini's Maati Ki Banno.

Our source states, "She will enter as the parallel lead who is the ex-wife of Vikram (Manoj Chandila). And her entry will only double the agony of Avanti (Via Roy Choudhury). The character of Saudamini that she plays, is completely obsessed over her husband. She will have a negative shade to portray too".

We hear that Aasiya has begun shoot from today, and her entry is expected to air by the end of this week or the beginning of next week.

When contacted, Aasiya confirmed the news to TellyBuzz, "Yes, I am entering in Maati Ki Banno. But I cannot tell you anything other than this. You please watch the show to know more".

If sources are to be believed, this particular role is so very different from the character of Santo, that Aasiya Kazi's entry is sure to stun both her fans and critics..

Let's see how the audience reacts to this sea-change that Aasiya is attempting..

larki_punjaban 9 years ago i saw her last night watching he show i didnt liekd her so much qauz i was actually used to watch ehr as santu so let's what will happen!

bishop22 9 years ago Aasiya absolutely rocked in today's episode....they showed the innocent girls fallling in love, and eagerly waiting to marry him...then gets married to him...but his expression on the marriage day and when he takes her home says something else....Aasiya is the best

Demigoddess 9 years ago Yeah she was looking soo good. Plus her smile widin d veil was so beautiful. Agn n agn d camera was focussing it. She rocks

Unnsss 9 years ago Ya, i hope the cv's doesnt show her only in pink, she looks beautiful in yellow, peach, green etc. But they said that she plays a obsessive person so think it wil be pink most of all the time.

Hoee 9 years ago I saw her entry episode,n agree with pyar-ishq,even though the c.v had not show her face but the entire concept do make her look obsessive. But dont want to see her always in pink they should show her wearing different colors cloths.

IPSO_FACTO 9 years ago The entire dress up of her is ummm totally different from santu.but still not looking like a vamp. There was a scene where lead hears a vampish laugh,but it was so childish laugh..

nicavero 9 years ago Hmmm... I was thinking the same, she have an innocent and cute face, how wil she look acting grey character.

IPSO_FACTO 9 years ago Are yar i saw pics of her in new avatar..shes looking so cute not a vamp.lol as i said no1 can hide bachpana on her face.