No actors. No scripts. No dialogues. No false emotions. No fake controversies! 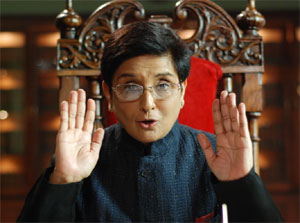 Star Plus' Aap Ki Kachehri Kiran Ke Saath is about real people, real disputes, real drama and real emotions. A first of its kind on Indian television, the show offers open hearings of civil disputes and a compassionate, yet firm and lawful mediation and arbitration by Dr. Kiran Bedi. This journey from the despair of dispute to hopeful resolution is laden with the promise of fascinating insights into human behavior and values of our society today, along with promoting a better understanding of our rights and laws.

Each episode will see disputants bringing forth their conflicts, stating and arguing their complaints and demands themselves. As the human stories unfold, common predicaments and real dilemmas will be laid bare. From calm reasoning, heated arguments to raw emotional outbursts - helplessness, anger, despair, and often, relief – Aap Ki Kachehri Kiran Ke Saath encapsulates a variety of human behavior and emotions.

At the helm of the show as mediator/arbitrator is India's first woman police officer and Magsaysay Award winner, Kiran Bedi. An icon who is known to be fair, frank and fearless. While dealing with the disputes, she is the questioner, counselor, mediator and arbiter, all rolled into one. Her dealings though compassionate, rest on firm foundations of the law, rights and social equity.

Whether it is a combination of real life drama and emotion and / or legal awareness, there is something refreshing in the show for every viewer. Above all, Aap Ki Kachehri Kiran Ke Saath is a ray of hope in the lives of millions of people struggling to be heard.

Ep 1, Monday, December 1
This episode sheds light on the plight of a woman brutalized by her mother-in-law for being childless and the state of her husband; torn between the love for his wife and his love for his mother.

Ep 2, Tuesday, December 2
Two sisters battle over the will of a dead man – one is his wife and the other his mistress. Dr. Kiran Bedi helps them reach an understanding which is acceptable to both.

Ep 3, Wednesday, December 3
A harassed wife brings her insensitive husband to the Kachehri to fight for her rights; for the future of their child. Dr. Bedi sheds light on the rights, responsibilities and obligations of partners in a marriage.

Ep 4, Thursday, December 4
The bond of friendship is put to test at the Kachehri where two friends clash to fight on the damages done to the cart owned by one of them. Dr. Kiran Bedi mediates this volatile situation.

Watch Aap Ki Kachehri Kiran Ke Saath that gives justice to some and is an eye opener to many others Premiering December 1, Monday – Thursday, 10.30 pm only on STAR Plus!

ArjaAddict 11 years ago hmmmmm......they cud have kept this one on weekend slot n have give kasturi this timing!!
well...thanks 4 the news

SamLuvsSaRun 11 years ago Thanks So happy a sensible show is coming on the 10:30 slot of Star Plus:)

Nisha_90 11 years ago i''m really happy fr d fact dat kiran bedi is trying to help through her way which i think very gud.all the best mam.we all are with u