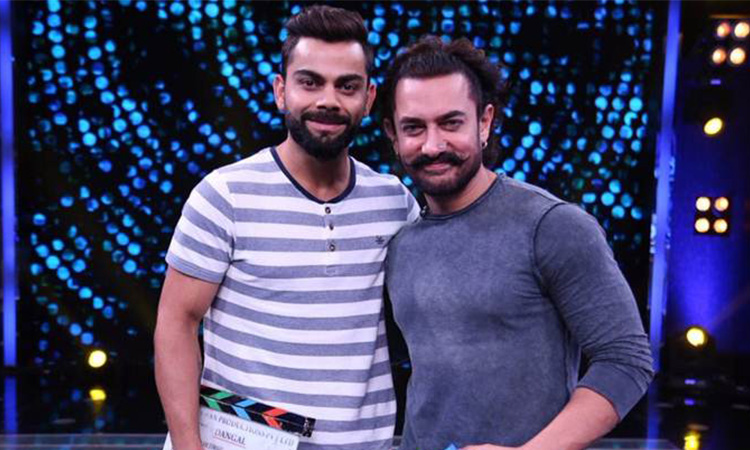 Superstar Aamir Khan, who had earlier appeared on a chat show with Virat Kohli, praised the India cricket captain for supporting young sportsmen in the country.

"I think what Virat is doing and his entire effort to support to young sportsmen across the country is a wonderful idea," Aamir said on the sidelines of the first edition of Indian Sports Honour Awards organised by the Virat Kohli Foundation on Saturday here.

Apart from Aamir, choreographer-filmmaker Farah Khan along with some of the cricket personalities attended the event.

Kohli and his girlfriend and actress-producer Anushka Sharma stole the limelight as they walked together on the red carpet.

Actor Sidharth Malhotra said that a lot needs to be done when it comes to sports. "Today, it's a great thing that we are honouring all sport personalities for their contribution to the country.

"I have just come here to support them. While growing up, I used to play rugby, football and basketball so, I think a lot has to be done when it comes to sports. Today's event makes it more important because they are supporting other sports apart from cricket. It's a great initiative," he added.

Tennis star Sania Mirza admired Kohli's efforts. "Virat is doing an amazing job. We all know, the amazing batsman he is and the amazing captain we have. But it's really nice, as an athlete what he is trying to bring in sports and trying to give exposure to every other sport in our country."

Farah, a close friend of Mirza, was also excited for the awards.

"I feel a film should be made on Sania Mirza's life. She has a great story. I don't know if I can make it because I am not sporty, but if possible I would love to because she is one of my best friends. As of now, I don't have such plans," said the "Happy New Year" director.