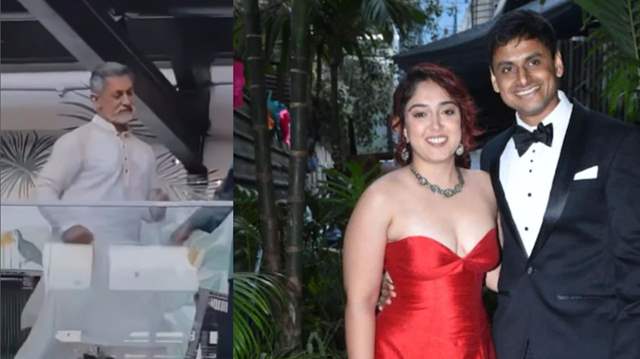 Aamir Khan's daughter Ira was quite open about her love life on social media and it came as no surprise when we saw the proposal video of Ira with her long-term boyfriend Nupur Shikhare. The duo got engaged on November 18th, in a private ceremony with close family members and friends in their presence. The event was graced by Aamir's mother, ex-wife Kiran Rao, and his co-star from film 'Dangal', Fatima Sana Shaikh. Aamir's sister Nikhat Khan, nephew and actor Imran Khan, his daughter Imara Malik Khan, mother Zeenat Hussain were also in attendance.

Now an inside video from the ceremony have been making rounds on social media wherein Aamir Khan and his cousin Mansoor Khan can be seen grooving to his popular song from the film Qayamat Se Qayamat Tak 'Papa Kehte Hai'.

To be noted, the 1988 Mansoor film marked Aamir's acting debut as a leading man.

Aamir, 57, hosted the party while clad in a white kurta pyjama and sporting a white beard and hair look. Mansoor was persuaded to dance with Aamir when the song Papa Kehte Hain was being played loudly. As Ira Khan and other guests applauded him, Aamir also performed his well-known dance moves from the song.

For the ceremony, Ira was seen donning a red flowy tube dress with basic makeup and her hair tied into a bun, while Nupur complimented her in a black tuxedo. For the unversed, Ira Khan is Aamir's second child from his first wife, Reena Dutta.