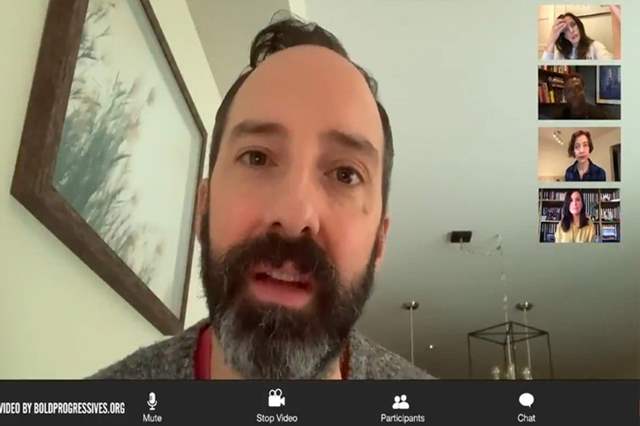 From Veep, and The Daily Show and Community and Orange Is The New Black and others, the stars of these shows and even an Avenger convened for a last-minute push to voters to stress the importance of voting in person on Election Day in a Zoom parody that poked fun at the recent spate of TV and film fundraiser reunions being held for the Democratic Party.

The witty bit — which was written by film and TV producer Stephen Levinson, Progressive Change Campaign Committee co-founder Adam Green and Veep showrunner David Mandel — sees the slew of TV stars barging into one another's virtual reunions, thinking they were calling in for a gathering with their own show's cast. With each call-in, the reunion gets bigger and bigger — and more confusing for the participants.

The video begins as another Veep mini-gathering with Tony Hale, Anna Chlumsky and Sam Richardson, but starts to veer off course when Hale’s Toy Story co-star Kristen Schaal joins the call.

From there, they are eventually surprised by the following slew of stars: Community's Yvette Nicole Brown and Joel McHale; Orange Is the New Black's Alysia Reiner, Beth Dover, Vicci Martinez and Emily Tarver; Two and a Half Men's Jon Cryer; Meet the Patels' Ravi Patel; Westworld's Ptolemy Slocum, Leonardo Nam, Angela Sarafyan; and The Daily Show's Al Madrigal and John Hodgman. There are also cameos from Tim Meadows and Mark Ruffalo, the latter who closes out the reunion when he shows up for what he thinks is another Avengers gathering.

"If we had someone else than President Overbronzer in the White House, we could stop doing all these endless Zoom reunions and could actually be seeing each other in person," sums up McHale of the (scripted) debacle.

The collective message from the group, however, is a serious one heading into Election Day — it's time to vote in person, and vote as early as possible on Nov. 3.

"Vote early if you can. Vote in person if you can. But mailing in your ballot is no longer a great option if you want your ballot to be received on time," stressed Richardson, in a message that was echoed by the other stars, who directed viewers to visit VoteWith.US for voting information in their state.