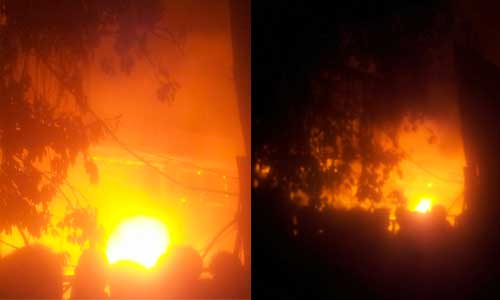 It seems that Balalji Telefilms' popular show Ye Hai Mohabbatein though is riding high with the popularity and the success of the show however, a bad omen meanders over the show.

While earlier the show's edit was stalled because of the fire gutted at Lotus Business Park and now on the auspicious occasion of New year a massive fire broke out nearby located godown where the entire Bhalla house was gutted.

As seen in the picture the lashes of the fire gutting from the set however none of the actors neither the team members were injured as they already had left from the set after their pack up.

Our reliable sources informed us the exact reason of the fire,  "A godown near the set at Klick Nixon studio caught fire due to the cracker which accidentally entered into the godown. The fire got so intense that it also gutted the YHM set which was situated close to the godown."

"Immediately more than 12 fire brigades reached at the spot to extinguish the fire. Soon the situation was under control and only the Bhalla house got damaged. Luckily there was no loss of any life as no body was present on the set," concludes our source.

To know little bit about the damage caused we got in touch with Mihika Verma who essays Mihika and she says, "We all are fine as nobody got injured because our shoot got wound up at around 9 pm. But we are really upset as our set got demolish. When we become part of a show and shoot everyday on a set, that set becomes our home and no more remain set. So we all are really heart broken that our house got burn. Though it will be re built but still we get the same feeling. We all were lucky that we all are safe we packed up an hour before the accident. I got the news at around 10.15pm as we got an image in our group and we all were shocked."

We hope that everything gets settled soon and the damage is recovered soon!

+ 2
6 years ago Glad everyone is safe and sound...
Hope for the quick recovery of losses faced by YHM team.

+ 2
6 years ago ): very sad happy that everyone is safe YHM rocksss

+ 2
6 years ago Glad everyone is safe..
Stay bless everyone

6 years ago Glad everyone is safe. Love Yeh Hai Mohabbatein and the jodi of Divyanka Tripathi and Karan Patel

6 years ago OMG! I'm glad everyone is safe. How unlucky!

+ 2
6 years ago It's third time on YHM sets i guess!!Thank GOD!! Every1 including crew members is safe!! Bhalla House got totally damaged is so sad but now at least i expect they will show REAL 5BHK flat

+ 6
6 years ago One more fire accident on same sets.. not done.. glad no one got injured... but bhalla house got damaged.. sad..

+ 4
6 years ago Oh man :( that's sad! I hope the team are strong to overcome this hopefully they can find a new flat/set, best wishes from my side :)

6 years ago So happy to hear no one was injured...good luck to all!