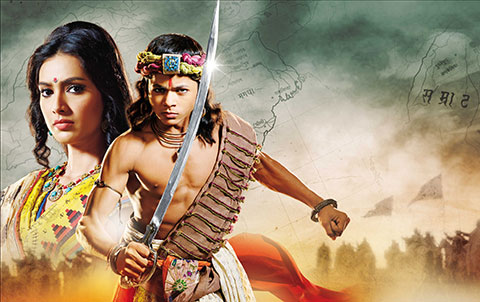 It all started in February, 2015 when COLORS launched the captivating tale of young Ashoka whose sole aim in life was to restore his mother's dignity. Over the course of the past few months, Chakravartin Ashoka Samrat has become a favourite among viewers as the journey of the young boy has taken him to Magadh where he lives his life under the watchful eye of King Bindusar's counsellor, Chanakya. And now, the team of the show, which has claimed the spot of the No. 2 show on Indian television, has an all-new reason to rejoice as Chakravartin Ashoka Samrat reaches the 100-episode milestone.
Every episode of Chakravartin Ashoka Samrat has been a unique and enriching journey for the crew. The success of the showbears testimony that the efforts of the cast and crew in providing viewers a glimpse into Mauryan customs and traditions has struck a favourable chord with the viewers.
With the growing success of the show, the popularity of the show's actors has also skyrocketed. Commenting on how Chakravartin Ashoka Samrat has changed his life, lead protagonist Siddharth Nigam aka Ashoka said, "Chakravartin Ashoka Samrat, for me, has been an experience of a lifetime. It feels like just yesterday when we started filming the show, and now we are already pushing the 100-episode mark. Playing a character as strong and confident as Ashoka has taught me so much about the Emperor and his personality - something that I had never thought I would learn first-hand. I would like to take a moment to thank all our fans who have been watching the show; today's celebration is as much a victory for them as it is for us."
With the mammoth sets put together at Karjat, and being shot extensively across India including the arid deserts of Rajasthan, the scale of the show is unparalleled. Pallavi Subhash, who plays the role of Ashoka's mother, Dharma says, "Every moment spent on the sets of Chakravartin Ashoka Samrat has been a celebration of sorts. We have become like a family. And as we complete this momentous landmark, I feel that there are only good things to come for the show in the future."
Sameer Dharmadhikari, the actor who essays Emperor Bindusar feels the cast has gotten more together as the show continues. He says, "I have portrayed the character of a king in the past, but the journey that Bindusar has undergone over the months surpasses them all. As we cross the 100-episode mark, it's a moment of celebration for the entire team whose hardwork and efforts have been realized thanks to the spectacular feedback that the show has received."
Speaking about the century completion, Manoj Joshi, who plays Chanakya, said, "Chanakya is a character close to my heart and being involved in the second leg of his life with Bindusar and Ashoka makes Chakravartin Ashoka Samrat even more important to me. It has been a pleasant experience shooting with a diverse cast and crew, making the larger than life portrayal of the story even more exciting for us. The feedback that we have received has been tremendously encouraging and we are waiting for more tales in Ashoka's life to unfold. Here's to more achievements for the show!"
Speaking about the milestone, Abhimanyu Singh, CEO - Contiloe said, "Thank you team Asoka and the viewers and hopefully we will cross many more landmarks on this historical journey."
As trouble brews once again on the show, Justin looks for an escape route out of the palace for the love of his life Noor and their illegitimate son Siamak. At the same time, Dharma flees from the clutches of Mir and Ashoka and the palace guards, only to find Chanakya unconscious. Being the sole knight in shining armor, what lies next for young Ashoka?

5 years ago from playing sweet Bahus to now rocking this character!!!way to go

+ 2
5 years ago Congratulations to the whole team.. Luv dis show to da core!

5 years ago congrats to CAS team.. all the actors are doing gr8 and love this serial.. waiting for upcoming drama ahead..

5 years ago congratulation to the entire team .sameer dharmadhikari he is the best love him

+ 6
5 years ago Hats Off to the makers for coming with a convincing historical drama!!... Thank You Contiloe Team and Colors for treating us with daily dose of entertainment when clock strikes 9...!!!

Three Cheers for Siddharth Nigam for flawless portrayal of Ashoka!!!

+ 4
5 years ago Firstly heartiest congratulations to the cast, crew and execution team for a fabulous show.

The set design needs a special mention. The columns, intricate architecture keeping with those times is a feat in itself.

And then there is the costume designer who has done a fantastic job with every Queen. Each with her own distinctive style not forgetting the Grecian Rajmata Helena!

Attention to detail is something the CVs have ensured.

Yes the show has dragged in between, but what is Indian TV without a whole lot of drama?

So kuddos to the team for 100th epi and wishing more and greater success especially the young actors , who between their studies manage to multitask and still shine on screen with brilliant acting.


So cheers once again and CONGRATS!

5 years ago wishing you all the best sameer dharmadhikari..hope to see more of you

5 years ago we want samrata pair on screen..Love u so much sameer dharmadhikari