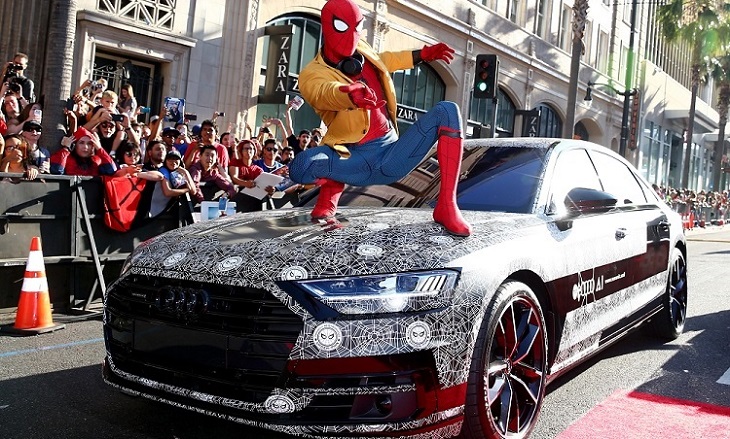 In the Marvel blockbuster, Tom Holland plays 'Peter Parker' who's chauffeured around by 'Happy Hogan' (Jon Favreau) in the new Audi A8 L.
The movie scene allows a first impression of the new sedan.Besides that, moviegoers also get a demo of new innovations such as highly automated driving in traffic jams: while driving 'Happy' takes his hands off the steering wheel and, like magic, it continues to turn all on its own.
The Audi A8 takes over the task of driving when the Audi AI traffic jam pilot is turned on. Audi is set to officially present the new A8 to the public on July 11, 2017, at the Audi Summit (www.summit.audi) in Barcelona. 'Spider-Man: Homecoming', featuring the new Audi A8, can be seen in movie theatres worldwide in July.
The film released on 7th July 2017 in India. The car was also seen in Los Angeles alongside many Hollywood stars at the world premiere of 'Spider-Man: Homecoming.' Tom Holland, who stars as Peter Parker / Spider-Man, was chauffeured down the red carpet at the TCL Chinese Theatre. Meanwhile, Robert Downey Jr. and Jon Favreau arrived together in a black Audi R8 Spyder.
Now, isn't this a win-win situation for someone who's a car fanatic and a movie buff?
0 Likes

'Spiderman: Into The Spider-Verse' Sequel Gets Production Underway ...