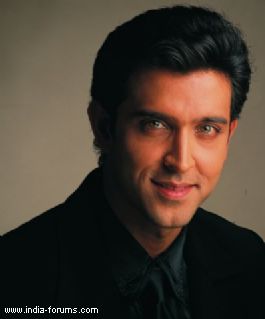 Hrithik Roshan's well-tonned body may have inspired many, but guess who is his inspiration? A 66-year-old woman, Madhavi Laad, who he met in his gym.

'Guess who I met while working out at true fitness!! My new inspiration! That's Mrs Madhavi Laad. Age 66. working out! Pushed by her son to join the gym! Bravo son! Moral 'its never to late 2 to be great!!' (So what's your excuse??!!) Cheers,' the 37-year-old tweeted.

Siddharth having the time of his life with Dhawan

Southern actor Siddharth, who made his Bollywood debut with 'Rang De Basanti', is working in David Dhawan's untitled project and says he is having a ball while shooting for the movie.

'Having the best time on David Dhawan's shoot. I feel 10 years younger just because of all the laughter..wonderful gang. Great moments of fun,' the 32-year-old posted on Twitter.

Raveena Tandon was recently seen at an event hosted by senior Samajwadi Party leader Mohnish Halder and her presence sparked rumours that she is planning to enter politics. However, the actress says she has no such intentions.

The event was an annual function of NGO Samantawadi Mahila Vikas Foundation.

'To set the record straight, not campaigned for a party, i am very apolitical. (I) was invited by a women's organization to honour and give out certificates to their women achievers, whom the organisation had trained for employment. Didn't see any political boards,' the 37-year-old tweeted.