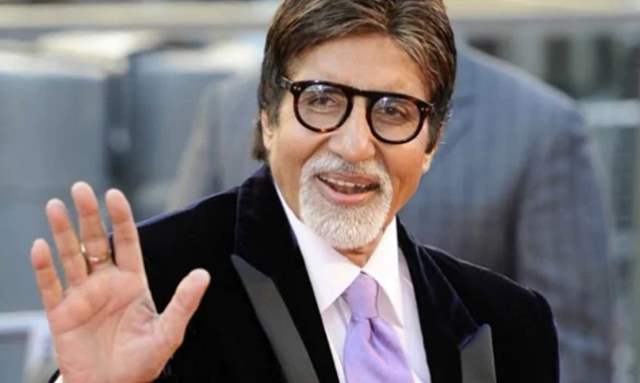 Amitabh Bachchan as rightly called The Shahenshah of Bollywood has by now mastered the art of hitting back at trolls with utmost respect and generosity. The superstar often finds himself mired in nasty comments by anonymous users on the Internet, who leave no stone unturned in trolling celebrities.

Big B is an avid social media user and keeps updating his Twitter and his blog with his thoughts. However, often trolls find a way to criticize the actor and bash him with harsh comments. Unruffled by such comments, Bachchan in fact has had the most savage replies to trolls.

Recently, Amitabh Bachchan gave a befitting reply after he was mocked by a troll for allegedly taking money from Amul to endorse their campaign.

Here’s looking at the times, when the actor hit back at trolls like a boss:

1.) After Big B tested negative for Coronavirus on Sunday, he took to Twitter to announce the same and express his gratitude towards his fans. He also thanked the staff at Nanavati Hospital for their medical help.

Reacting to his tweet, a female user slammed the actor for ‘advertising’ for a hospital that allegedly wrongly tested her father positive for COVID-19, telling him that she had 'totally lost respect' for him.

Bachchan replied by saying: “I do not advertise for the Hospital, I want to thank them for THE care and treatment that I got and have done it for every Hospital that I have been admitted to...And one last thing .. MY RESPECT AND RESPECTABILITY is not going to be judged by you.” 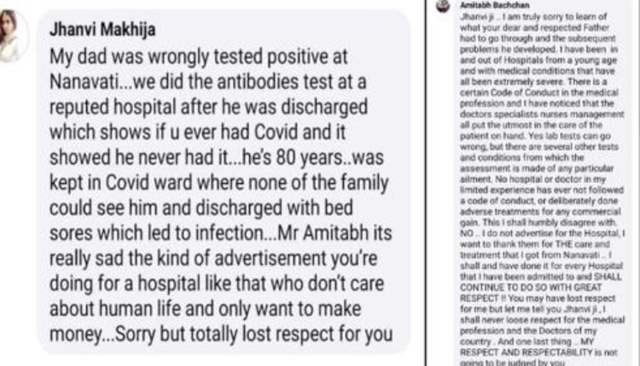 2.) Tracing back to the time when Amitabh Bachchan along with son Abhishek Bachchan was admitted to the hospital after testing positive for Coronavirus, a brutal troll had wished for his ill health and had written: “I hope you die with this Covid.”

Big B had hit back with a befitting reply to this in his open letter. He wrote:

“Hey Mr Anonymous .. you do not even write your Father’s name ,.. because you do not know who Fathered you .. there are only two things that can happen .. either I shall die or either I shall live .. if I die you wont get to write your diatribe anymore, by weathering your remark on a celebrity name .. pity .. for , the reason of your writing to be noticed was, because you took a swipe at Amitabh Bachchan .. that shall no longer exist .. !!”

“if by God’s grace I live and survive you shall have to be ‘weathering’ the ‘swipe’ storm , not just from me , but on a very conservative level, from 90+ million followers .. I have yet to tell them to .. but if I survive I shall .. and let me tell you they are a force incensed .. they traverse the entire World .. from the West to the East from the North to the South .. and they are not just the Ef of this page .. that extended family shall in the flash of an eye become ‘extermination family’ .. !!!!.. all I shall say to them is .. ‘Thok do s***o ko’.

He concluded the note saying, “May you burn in your own stew !!” 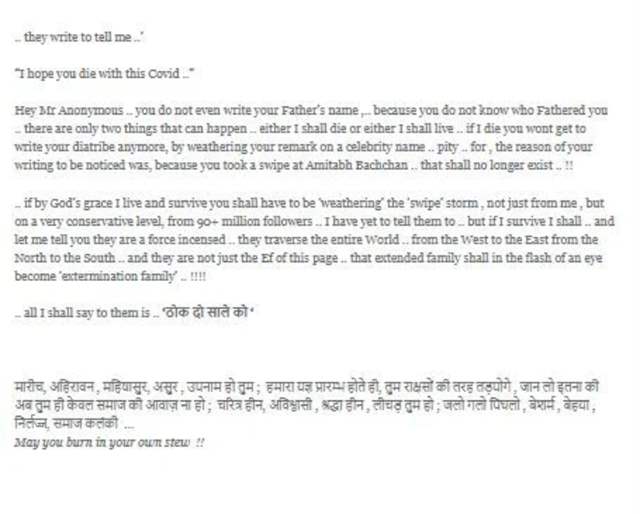 3.) Amitabh Bachchan had shut down a troll with a classy reply when he was asked about his daughter in law and actress Aishwarya Rai Bachchan and was addressed as a ‘buddha.’

His response was lauded by all fans. 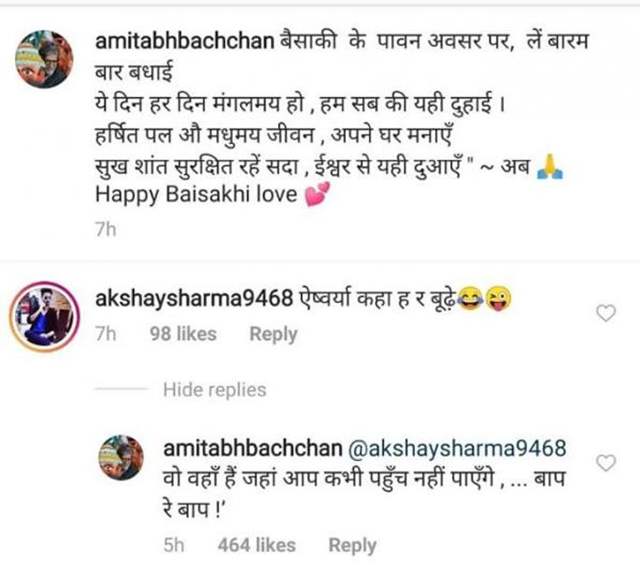 4.) Amitabh Bachchan often shares his reflective thoughts with his fans on twitter. However, once a troll criticised him and alleged that the actor had plagiarised a quote by scientist Charles Darwin.

Big B's post read, "It's not the strangest who survive, not the most intelligent, but the one most responsive to change. " ~ Ef k." To this, a Facebook user wrote, "Very strange and sad to note that you have now resorted to plagiarism. This is a quote by Charles Darwin at least you could have mentioned the same after the quote..... very sad and shameful."

Big B hit back with a savage reply as he wrote: "Sir Mr Sam G .. if you would care to notice the post, it is written within quotes("), which indicated that it is not mine .. also please note that after the quote is over and (") indicator is closed, there is a ~ Ef k written .. when this indication is given it shows where the quote came from .. The Ef is my extended family member whose initial is 'k' .. he sent me this , and i thought it was a good quote to share with the rest of my followers on FB .. some of the followers are English challenged, so I translated the quote to the best of my ability in Hindi .. that translation does not carry the (") mark because it is mine .. and so at the end of the Hindi, there is a ~ mark, with my initials AB, which in Hindi (added the Hindi letters)."

Calling the troll 'very sad and strange', Big B further wrote, "It is " very strange and sad to note " ( using your words as within quotes ) that you have resorted to chide me , without reading the post carefully .. '" very sad " .. I was going to use your own language and add 'shameful' , but my ethics do not permit me to .. whenever there has been an error on my part and I have been told of it I have never hesitated to either correct it, remove it and have sought an apology .. I am not ashamed of myself despite your rather harsh and obtuse verbosity .. be safe , be in precaution, and if you are from India , stay indoors and do not step out for India is in a lockdown." 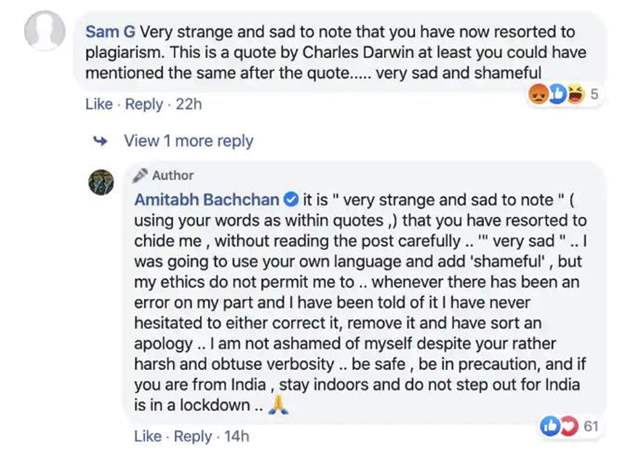 5.) When Amitabh Bachchan was criticised for not donating to help people affected by the COVID-19 crisis, the actor had silenced all trolls in a long post in Hindi.

"Ek ne diya aur keh diya ke diya, dusre ne diya aur kaha nahi ki diya. Dusri shreni me hi rehne do mujhe ae priyajan. Jise mila wo kya jaane kisne diya, jano uska bus karun krandan. In haalaton mein aur kya kaha jaye. Jo janein mujhe jaanein, mai to sada swabhao se hi raha hu kamsukhan (One gave and said that he did, another gave and did not say that he did. Let me be in the second category. The one who receives knows not who gave it just know his emotions, those who know me, know I have always been one to talk less) (sic)."

Well, now you know why one cannot mess with Big B!

phadukaran 1 months ago people can't even criticize or comment without being tagged as Trolls, heights of hypocrisy in Indian cinema