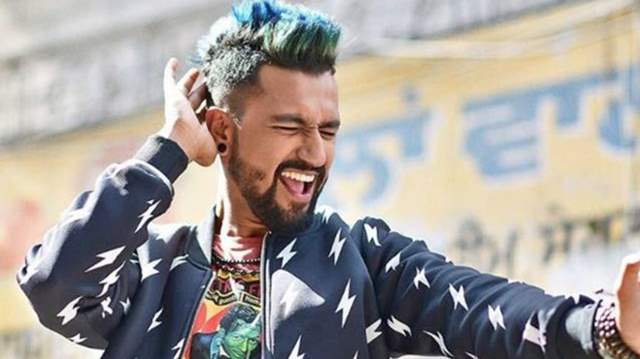 Vicky Kaushal has been one of the most prominent actors in the industry who is currently climbing the ladder of success with his stellar performances. Vicky has been a part of different genre of films and fans have loved the dynamism he shows.

Today, the actor took to his Instagram handle and shared a still from his film 'Manmarziyaan'. In the picture he is seen dressed in his character Vicky Sandhu, while his hair stylist is working on his hair.

Posting the image, Vicky went down the memory lane and also shared the anecdote behind the picture. He wrote, "#4yearsofManmarziyaan “Aashiqon ki jaan lega tu!”… scene that cost me a few stitches under the eye. Such a liberating experience to play Vicky Sandhu! Grateful for a memorable journey together @anuragkashyap10 @aanandlrai @taapsee @bachchan @kanika.d .

Vicky Kaushal played Vicky Sandhu, Tapsee's love interest in the film. The two demonstrated a great on-screen chemistry as Vicky and Rumi and it turned out to be one of their best performances.

Talking about Vicky's professional engagements, he is currently busy filming for 'Sam Bahadur'. He will share screen space with Fatima Sana Shaikh and Sanya Malhotra in the Meghna Gulzar directorial. Apart from that he will be seen in 'Govinda Naam Mera'. He will also be a part of Laxman Utekar's untitled romantic comedy alongside Sara Ali Khan.