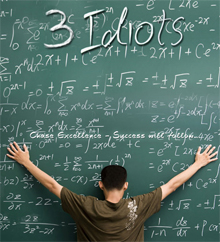 It's a soundtrack that's sure to click. Shantanu Moitra, who had scored the music for Rajkumar Hirani's 'Lage Raho Munnabhai', returns with '3 Idiots' and has churned out songs that are catchy, different and high on energy.

The soundtrack opens with 'All Izz Well', a fun campus song that is filled with whistles in the background. Crooned by Sonu Nigam, Swanand Kirkire and Shaan, the catchy song is already doing the rounds of music channels and is sure to be a chartbuster.

The song also has a remix version that has more beats.

Next is 'Zoobi doobi', the only song with a female voice. Sung by Shreya Ghoshal with ample support from Sonu Nigam, the track has a retro feel. It is a melodious number that grows on you.

'Zoobi doobi' too has a remix version with more contemporary sounds.

Then comes 'Behti hawa sa tha woh' that has Shaan and Shantanu Moitra behind the mike. It has a long prelude and seems to be a situational track. The poignant, slow number has soft musical backing and is very appealing.

Up next is 'Give me some sunshine' that includes dialogues by Sharman Joshi and vocals by Suraj Jagan. The song is an unplugged version and will appeal to the younger generation mainly because of the composition and the song's rebel attitude.

The album offers a very nice song in 'Jaane nahin denge' sung by Sonu Nigam. It gets an edge with a sudden increase in tempo during the course of the song. There is minimal orchestration and focus on vocals. The lyrics are raw and intense.

On the whole, the album is a good mix of slow and fast-paced songs. Shantanu Moitra has scored quality music that has melody and generates lots of interest.