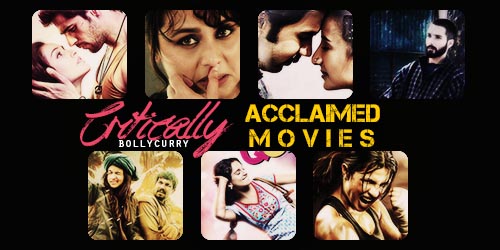 Over its many years of entertainment, Bollywood has managed to give hits that are memorable and easily captivate millions of hearts. The Hindi Cinema does not only revolve around good looking actors, or actors that mint the Box Office. Bollywood also produces movies that have a meaning, movies that receive critical acclaim and appreciation. Among many, we at BollyCurry have short listed the movies from 2014 that left the critics speechless.
Queen

The story begins begins with Rani Mehra (Kangana Ranaut) being ditched by her fiance, Vijay (Rajkummar Rao). This hurts Rani and she begins to show symptoms of depression. A while later, she decides to go to France on her honeymoon alone. There she meets a girl Vijayalakshmi (Lisa Haydon) of French-Spanish-Indian origin. Slowly Vijayalakshmi helps Rani become open and take on a life of her own. As the movie progresses, Rani visits Amsterdam, where she ends up living with 3 men. She has no issues as they respect her and gradually becomes friends with them. This is a coming-of-age movie as it follows Rani's life after she decides that woman does not necessarily need the support of a man to lead a happy life. The movie was well-appreciated for its simple yet elegant story, beautiful locations and of course, brilliant acting by Ranaut.
Highway

A movie that was made from the story of a TV episode that aired several years back, Highway focuses on a rich girl Veera Tripathi (Alia Bhatt), who is kidnapped by Mahabir Bhati (Randeep Hooda). Then begins a road trip and a journey as Mahabir takes Veera through different cities to get away from the police that is chasing after them. Over the trip Veera and Mahabir get closer. What happens next forms the crux. The movie had a high impact story, which pleased both critics and box office viewers. Bhatt, who has often been underrated, proved himself yet again with this movie, while Bhatt excelled herself in just her second movie (after Student of the Year). The odd pairing of Hooda and Bhatt also went well-appreciated.
Mary Kom

The story begins with Mangte Chungneijang Mary Kom (Priyanka Chopra) along with Onler Kom (Darshan Kumar) going for their child's delivery. The film then shifts to a flashback of Mary Kom chasing a boy in a boxing gym. This begins her interest in the game of boxing. At one point coach Narjit Singh (Sunil Thapa) starts teaching her boxing and names her Mary Kom. However, she does not tell her dad and confesses only to her mother. The story then proceeds with Mary Kom's struggles from poverty and discrimination to unbeatable success. The movie was widely appreciated for Priyanka Chopra's stellar acting as Mary Kom. What better praise can there be when Mary Kom herself praised Priyanka Chopra? From her toned physique of a boxer, to her strong language, Chopra has clearly marked herself as the best female actor in Bollywood.
Haider

Haider is the Indian adaptation of Shakespeare's Hamlet. The story revolves around a young man Haider (Shahid Kapoor) who returns home to Kashmir when he receives news about his father, Dr. Hilal Meer's (Narendra Jha) disappearance. He learns that not only has his father has been detained by security forces for harboring militants but that his mother Ghazala (Tabu) is in a relationship with his own uncle Khurram (Kay Kay Menon). Later, drama follows as mother-son struggle to come to terms with the news of his father's death. No sooner he also learns that his uncle is responsible for the gruesome murder of his father and then starts his journey to avenge his father's death. The movie not only garnered lots of attention due to its controversial matter but was also appreciated by masses for the uniqueness in it's storyline. Kapoor received equal praise for his strong portrayal of Haider.
Mardaani

This plot is about a female Police officer, Shivani Shivaji Roy (Rani Mukherjee) who lives with her husband, Dr. Bikram Roy (Jisshu Sengupta) and her little niece, Meera. Shivani is fearless cop who can take on anyone or anything. Soon, Shivani takes up a case which changes her life. A teenage girl, Pyaari, who is like a daughter to her is kidnapped by a trafficking mafia kingpin (Tahir Bhasin). The movie focuses on a cat-and-mouse game between Walt/Karan Rastogi (Tahir Bhasin) and Shivani as she tracks Pyaari and delves deeper into the world of flesh trade and drugs. The movie was praised for Rani Mukherjee's brilliance as Shivani as well as its take on the flesh trade, drugs, the underworld - a concept that never seizes to catch the attention of any and all viewers.
Citylights

This movie tells the story of an ex-army man, Deepak Singh (Rajkummar Rao), who comes to Mumbai with his wife and daughter in search of a better life after he loses his shop in Rajasthan. The story depicts their encounter with a big city, the challenges they face and how they rise to meet those challenges. Without giving much of the story, we can say that this was by far one of the best films as stated by critics and will stay with you for a long time. So if you're looking for a movie that has a good story, this is your stop.
Ek Villain

This is another movie which was highly appreciated by the critics. The story revolves around Guru (Sidharth Malhotra) who is a quiet, tough and ruthless man working for a gangster. His life changes when he meets a free spirited girl, Aisha (Shraddha Kapoor) who he falls in love with and gets married to. Quitting his work as a gangster, he moves to Mumbai to begin a new life. Just when everything seemed perfect, Aisha falls prey to an attack and gets killed. Thus begins Guru's hunt to find the killer and avenge his wife's death which leads him to blur the line between good and evil. Riteish Deshmukh received a lot of praise for his role of a common man-turned-psychopathic murderer. The storyline was also praised for its thriller aspect and the songs received high ratings, making the overall movie a success in all fields.
Even though some of the above movies might have not satisfied the hunger of the Box Office, they definitely succeeded in winning praises from critics and won hearts of millions. These are not the only movies, but these are by far, the best critically acclaimed movies for 2014. Here's hoping that 2015 will bring us many more of such movies instead of the cliche rom-coms.
Writer(s): Vaishnavi V. and Peehu A.
Editor(s): Shreya S. and Sonia R.
Graphics: Virina R.
Do you have a suggestion or comment for BollyCurry? Drop us a PM at BC_Dropbox today!