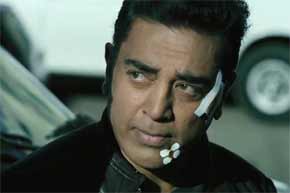 Entertainment will have no bounds in the Tamil and Telugu film industry in 2013, as an exciting mix of star-studded films and umpteen number of remakes are getting lined up to hit the theatres.

The new year will begin with one of the most anticipated films - "Vishwaroopam", a Tamil-Hindi bilingual starring Kamal Haasan, who has also directed it. It will be the first film to be released on a direct-to-home (DTH) platform, a day before its release in theatres. It is releasing Jan 11.

Three more films will compete with Kamal's film during the Pongal weekend. After his disastrous "Saguni", Karthi will return action-drama "Alex Pandian". Vishal, who didn't have a single release in 2012, will be back with romantic-action "Samar". Santhanam's debut production, romantic-comedy "Kanna Laddu Thinna Aasaya", will also release during the same weekend.

Pongal is the biggest festival season for south Indians and since it is celebrated over four days, most films want to cash in on this opportunity. This year, including two big Telugu releases, four Tamil films, will clash at the box-office, said trade analyst Trinath.

With more than 400 theatres in Tamil Nadu already being blocked for the release of "Vishwaroopam", a Rs.95-crore budget film, it will be tough for other films to find a healthy number of theatres.

Superstar Rajinikanth will come all guns blazing in Tamil period-drama "Kochadaiyaan", directed by his daughter Soundarya Ashwin. This will be his return to the silver screen after three long years since "Enthiran".

After registering flops in 2012, top actors Suriya, Vikram and Ajith, can hope to taste success in 2013.

Suriya will return as an angry and righteous cop in "Singam 2", while Vikram has two promising films lined up -- Tamil-Hindi bilingual "David", which is coming out in February, and Shankar's romantic-thriller "I".

R. Srinivasan, distributor, feels that "stars will continue doing commercial entertainers to keep themselves in the race. It will be very unlikely to see a star to break the monotony and experiment unless the project is exciting and guarantees high returns".

Some Tamil films to look forward to in 2013 are "Kadal", "Aadhi Bhagwan", "Paradesi", "Biriyani", "Irandam Ulagam" and "Mariyaan".

Since most top heroes could only manage doing one film in 2012, they would want to do more films in 2013, says Trinath.

"Be it Mahesh Babu, Allu Arjun, Ajith and Suriya... all these actors managed to do only one film in 2012. They will all hope to work faster and release as many films as possible in this year. Mahesh has signed two new films and hopes to finish and release both within the year. Likewise, Pawan Kalyan also hopes to work on multiple projects to save time," he said.

Ram Charan Teja will be seen in three films in 2013.

His most ambitious film "Naayak", directed by V.V. Vinayak and "Seethamma Vakitlo Sirimalle Chettu", another big budget multi-starrer with Mahesh Babu and Victory Venkatesh in the lead, will lock horns on the same day Jan 11.

Two other films of Ram are Telugu action-drama "Yevadu" and Hindi-Telugu bilingual "Zanjeer", a remake of Amitabh Bachchan's super hit film of the same name.

"Leading heroes will continue doing films with a predefined formula because it is safe and a rapidly growing trend in Bollywood too," said Telugu director Madhura Sreedhar.

Junior NTR will be seen in "Baadshah", directed by Srinu Vaitla, in the summer of next year. And Venkatesh will been as a don in crime-thriller "Shadow", directed by Meher Ramesh.

Meanwhile, Bollywood will continue to cash in on regional remakes, feels Srinivasan.

"The number of remakes is sure to increase this year. Bollywood will continue to cash in on regional films, both in Tamil and Telugu, as most remakes of the recent past did exceptionally good business. Most of these films comfortably made it to the Rs.100-crore club", he said.

The year 2013 will welcome films such as Prabhu Deva's "Ramaiya Vasta Vaiya", a remake of Telugu blockbuster "Nuvvostanante Nenoddantana" and Salman Khan's "Kick", which is a remake of a Telugu super hit film of the same name.